The Australia men’s national basketball team is in need of a new coach for the 2021 Tokyo Summer Olympics after Brett Brown officially stepped down from the post on Tuesday.

The 59-year-old tactician, who was relieved of his duties as head coach of the Philadelphia 76ers last August, cited his uncertain coaching future in the NBA and the COVID-19 pandemic as driving forces behind his decision.

“The uncertainties around the direction of my professional future unfortunately mean that I cannot commit to the time and preparation that this job deserves and requires,” Brown said in a statement relayed by Basketball Australia. “The difficulties around traveling internationally with my family during the pandemic have also contributed to my decision … This was a difficult decision which did not come easy. “

Brett Brown has been working with the Boomers in multiple capacities since 1990. He was given full reins last year, in hopes that it would influence his former Sixers All-Star Ben Simmons in suiting up for the national team.

Brown revealed that he is stepping down with a heavy heart, but will still try to help out in other ways.

“My past experiences with the current Boomer players are among my most memorable as a coach. To coach the Boomers was a privilege and an honor. I will work closely with Basketball Australia in any way that I can to ensure a smooth and successful transition,” he said. 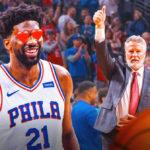 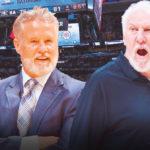 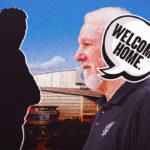 “Basketball Australia is naturally disappointed that Brett is no longer able to commit to being the Boomers head coach for the delayed Tokyo Olympics but we fully understand Brett’s situation, and appreciate his candidness when informing us of the decision,” he said.

The Sixers, meanwhile, let go of Brown just days after they were swept by the Boston Celtics in the first round of the 2020 playoffs. It may be a while before we see Brown back in the sidelines.