Former NBA forward Shawn Marion doesn’t believe players should sit out the rest of the 2019-20 season, telling TMZ Sports he believes resuming the season will be more effective in the fight against systemic racial injustice.

“In order for you to advocate and go out here and show what you’re fighting for and the causes, you need to be on TV,” Marion said. “Social media is a great platform, but TV is a bigger platform because you can post whatever you post on TV, you can post to your social media platform. So, with the season resuming, it adds to that cause.”

But, as for sitting? — “I don’t agree with that.” “What is sitting out, boycotting, not playing the season — what is that gonna accomplish really?”

Furthermore, Marion believes that players will be able to speak out in interviews and press conferences, which will attract more audiences than their social media accounts.

Several prominent players like Kyrie Irving and Dwight Howard expressed concern about the NBA resuming play in July. They believe it will take the spotlight away from the Black Lives Matter movement. However, as Marion said, players will have a much bigger platform to spread their messages if they decide to play in the NBA’s planned return in Orlando. The NBA has a global social media platform that reaches 1.8 billion people around the world.

Players will have until June 24 to inform their teams whether they plan to participate in the NBA’s return-to-play plan at Walt Disney World in Orlando. 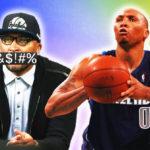 The 5 greatest Phoenix Suns of all time