Two of the teams attached to a pair of very messy trades ahead of the NBA’s deadline on Thursday just made a trade together, with the Houston Rockets trading center Jordan Bell to the Memphis Grizzlies, according to ESPN’s Adrian Wojnarowski.

Bell, 25, a former Golden State Warriors big man, was signed in the offseason by the Minnesota Timberwolves, who just traded for Warriors All-Star guard D’Angelo Russell for Andrew Wiggins, and traded to the Grizzlies in the last few days in that four-team convoluted deal between the Timberwolves, Rockets, Atlanta Hawks, and Denver Nuggets.

A total of 12 players, including Robert Covington and Rockets center Clint Capela, were exchanged between the four franchises, with Bell and Covington landing in Houston. 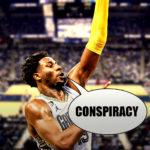 Bell, however, is quickly on his way out, going to the Grizzlies, who are in the middle of completing another deal with the Miami Heat surrounding former NBA Finals MVP with the Warriors Andre Iguodala, the veteran wing going to South Beach along with Oklahoma City Thunder forward Danilo Gallinari.

Caboclo is a 24-year-old Brazilian forward and former first-round pick of the Toronto Raptors from the 2017 draft. He has spent the past two seasons in Memphis with a steep decline in productivity during the 2019-20 season.