The conversation around Draymond Green‘s Game 5 suspension has been running hot ever since the news broke, with various members of both the Golden State Warriors and the Cleveland Cavaliers chiming in.

Former players have shared their thoughts on the situation as well, including TNT’s Reggie Miller.

Miller, who was known for his in-game antics throughout his career (most notably with the New York Knicks‘ John Starks), believes the NBA would have come to a different ruling if the series was tied at two games apiece.

Would bet my right arm if this series was even at 2-2 Draymond wouldn't be suspended for GM5. What happened in OKC was way worse..

Essentially, what Miller is getting at is that the league wouldn’t keep one of the game’s best and most valuable players, Green, off the court with an evened up series in the balance. But, since it’s 3-1, his absence builds the intrigue and drama around Game 5.

Miller also stated that Green’s incident in Oklahoma City, a low kick to the groin of Steven Adams, was much worse. While most fans agree with that sentiment, it misses the point of why Green has actually been suspended. 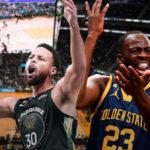 The NBA isn’t suspending Green just for hitting LeBron James below the belt, they’re doing it because they deemed that the play was worthy of a flagrant-one foul, and given all of the flagrant points Draymond had compiled in the playoffs, receiving this final call warranted an automatic suspension.

We’ll see how big of an impact it has tonight as the Warriors look to close out the series and win their second consecutive NBA title, capping off a historic 73-win season.