The Pittsburgh Steelers missed the boat to the NFL playoffs, but they have reasons to feel optimistic about their future. Among those reasons is wide receiver George Pickens, who showed a ton of promise during his first season in the pros.

While the Steelers’ offense was far from being considered elite in 2022 — Pittsburgh’s first season since Ben Roethlisberger decided to hang up his cleats — George Pickens provided a silver lining for the team’s attack with his ability to make tremendous plays downfield. In fact, according to Marcus Mosher of Pro Football Focus, the former Georgia Bulldogs star wider receiver ranked third overall in the 2022 NFL regular season in big play percentage.

Here is the 2022 data by looks (carries + targets) pic.twitter.com/BHzb6pNkc0

Only DeVante Parker of the New England Patriots and Terrace Marshall Jr. of the Carolina Panthers had recorded a higher big play rate than the Steelers rookie. It is worth noting, however, that Parker and Marshall each had fewer looks (and conversions) than Pickens, who converted 87 looks into 18 big plays. 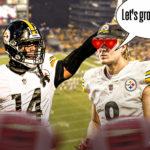 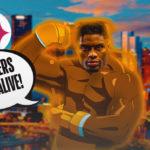 Steelers studs and duds from Week 16 win vs. Raiders 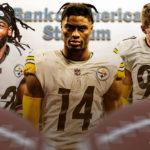 In the 2022 NFL regular season, George Pickens consistently showed his big-play capabilities. He had five games in which he posted at least a 20.75 yards per reception while getting multiple targets. Three of those contests came in the latter part of the season. Once he started to get the right feel of what it’s like to play against NFL competition, George Pickens became a much bigger headache for opposing defenses. And he proved that despite working with a fellow rookie as the Steelers quarterback in the form of Kenny Pickett.

Pickens played in all 17 games in 2022 for the Steelers and finished the season with 801 receiving yards and four touchdowns on 52 receptions.