The Wisconsin Badgers are sitting in dead last in the Big Ten after an 0-2 start in conference play. The Badgers, who are 2-3 on the year, hit the reset button in a big way on Sunday, making the shocking decision to fire head coach Paul Chryst amid their slow start. ESPN’s Adam Rittenberg broke the news of Chryst’s firing on Sunday and also revealed that Wisconsin plans to name Jim Leonhard as the program’s interim head coach.

SOURCE: Paul Chryst is out as #Wisconsin coach. Jim Leonhard will be the team's interim coach. Announcement will be coming shortly.

Chryst has been Wisconsin’s head coach since the 2015 season when he joined the program after spending three years at Pittsburgh. Across eight seasons in Wisconsin, Chryst posted a 67-26 record and a 6-1 record in bowl games.

After going 4-3 in the COVID-19 shortened season in 2020, and following that up with a 9-4 record in 2021 and the 2-3 start in 2022, the Badgers felt it was time to hit the reset button and make the foundational changes necessary sooner rather than later.

Leonhard will now get his first opportunity as a head coach while the Badgers seek out a long-term replacement for Chryst. Leonhard played for the Badgers in the early 2000s, serving as a return specialist from 2002-2004. 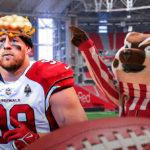 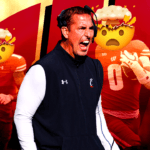 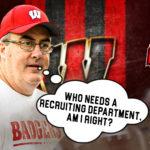 Leonhard joined the Badgers coaching staff in 2016 as a defensive backs coach and has slowly climbed the ranks since, culminating in the promotion to interim head coach on Sunday. He’ll hope to win over the locker room and help the Badgers recover from their slow start to turn in a solid season in 2022.

If Wisconsin fires Chryst without cause, the program would owe him a staggering $16.4 million, per ESPN’s Pete Thamel.