The Miami Heat have only been around since 1988, but they have already collected three NBA titles, which is more than most other franchises around the league can say.

Obviously, those are the three best teams in franchise history.

But which iteration of the Heat was the best?

Here are the three greatest Miami squads ever, ranked.

It’s funny, because some people would probably argue that the 2004-05 Heat were actually superior to the 2005-06 club, but the 2006 squad was the one that captured a championship.

Miami won 52 games during the regular season that year with a declining Shaquille O’Neal (he was still really good, but not quite as good as the year prior) and an old roster that included past-their-prime veterans such as Gary Payton, Antoine Walker, Jason Williams and Alonzo Mourning.

However, thanks to an outstanding performance from Dwyane Wade and some huge moments from O’Neal, the Heat came alive in the playoffs, taking out the Chicago Bulls, New Jersey Nets and Detroit Pistons en route to eventually topping Dirk Nowitzki and the Dallas Mavericks in a controversial finals (some still insist that the series was fixed).

The biggest hurdle for Miami that spring was the Pistons, who had beaten the Heat in the Eastern Conference Finals the previous year and were favored to do so again.

But the Heat managed to dispatch Detroit in six games, even holding a 3-1 lead at one point during the series.

They then rallied from a 2-0 deficit to beat the Mavericks.

It was hardly pretty along the way for the 2006 Heat, but they delivered when it mattered most, which is why they hold their place on this list.

LeBron James probably had the best individual season of his career in this season, but Wade was obviously in decline at this point, and a legitimate argument can be made that the Heat shouldn’t have even beaten the San Antonio Spurs in the finals anyway.

Remember: the Spurs appeared to have the series locked up in Game 6 before some really weird stuff happened in the waning moments, including Gregg Popovich inexplicably leaving Tim Duncan on the bench to watch the Heat grab a critical offensive rebound that led to Ray Allen’s game-tying three-pointer at the end of regulation.

The Heat were also pushed to seven games by the Indiana Pacers in the Eastern Conference Finals.

Regardless, James’ dominance elevated Miami in 2013, and Chris Bosh was arguably the second-best player on the team. His defensive versatility was paramount to the Heat’s success, and his ability to stretch the floor and shoot three-pointers (which was something he didn’t really do a whole lot of in previous years) added a new dimension to Miami’s offense.

Of course, the Heat also had shooters all over the floor, ranging from Allen to Mike Miller to Shane Battier.

Miami won 66 games during the regular season, its best mark in franchise history. The Heat then proceeded to defeat the Milwaukee Bucks, Chicago Bulls and the Pacers en route to finally topping the Spurs.

This was a lockout-shortened season, so the Heat finished with a record of 46-20. There was also a ton of pressure on LeBron and Co. after losing to the Mavericks in a six-game NBA Finals series in 2011. 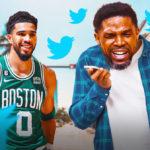 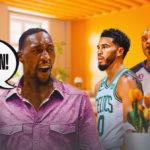 Throughout the year, Miami was rather inconsistent, but in a weak Eastern Conference, no one seemed to doubt the Heat’s ability to make it back to the finals.

Miami handled the New York Knicks in five games in the first round of the playoffs, but it didn’t take Erik Spoelstra’s squad long to run into trouble afterward.

In the second round, the Heat found themselves behind 2-1 to an upstart Pacers team, and Bosh had gone down with an abdominal injury in Game 1 that knocked him out for the remainder of the series.

Miami then responded in a big way, winning Games 4 through 6 behind terrific outings from James and Wade to win the series and punch its ticket to the Eastern Conference Finals.

There, the Heat met the tough, gritty Boston Celtics, who almost everyone expected to bow out in five or six games. Miami cruised to a 2-0 lead, but the Celtics rallied by winning three straight to take a 3-2 series lead.

That was when James had possibly the finest game of his career, dropping 45 points at TD Garden in Game 6 to even the series and pave the way to an eventual hard-fought Game 7 victory.

Riding that momentum, the Heat then rather easily beat the Oklahoma City Thunder in the finals, rattling off four straight victories after actually losing Game 1.

Between Game 6 of the Eastern Conference Finals and Game 5 of the NBA Finals, I’m not sure Miami ever played better ball during the LeBron era.