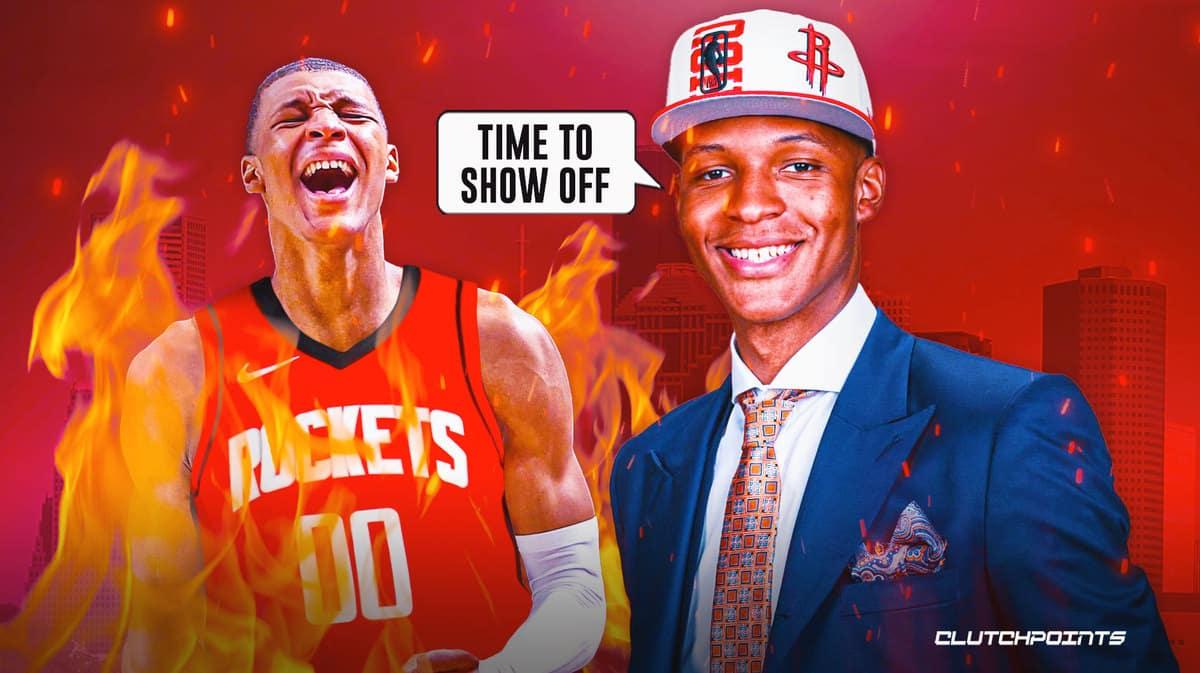 The days without basketball are over. After the brief period without any live games, the summer league has returned to cure the basketball withdrawal for fans everywhere. For the Houston Rockets, this is an especially exciting time. They are coming off an impressive draft and the franchise is in the developmental process for many young talents. Here are five major reasons that Rockets fans should be hyped ahead of the summer league matchups.

Despite seeming to be a lock to be the top pick for several weeks leading up to the draft, the Houston Rockets were pleasantly surprised by Jabari Smith’s availability with the third pick. The Auburn product has exciting two-way potential and is a great fit with the young core. Smith averaged 16.9 points, 7.4 rebounds, 2.0 assists, 1.1 steals, and 1.0 blocks in his sole year of college. He also produced a ridiculous 1.96 points per possession on catch-and-shoot opportunities this season.

The summer league will be Rockets fans’ first opportunity to get a look at the 19-year-old. Chet Holmgren made a major impression in his summer league debut and Smith has the opportunity to do the same. While the summer league is far from a make-or-break opportunity for a player’s career, getting off on the right foot makes the transition easier. The 6’10” forward has an NBA-ready style of play and will be sure to be ready for the spotlight in Las Vegas.

Jabari Smith may have taken the spotlight, but the Rockets did more work than just selecting third overall in the draft. Houston also selected Tari Eason with the 17th overall pick. The LSU product has the potential to end up as the best defender in the draft due to his versatility and activity.

The 21-year-old spent his first season at Cincinnati before transferring to LSU where he blossomed. Eason won the SEC Sixth Man Of The Year Award and looked to be the most impressive player on the LSU roster despite coming off the bench. He averaged 16.9 points, 6.6 rebounds, 1.9 steals, and 1.1 blocks last season. Eason plays with all-out effort on an every-play basis and is an exciting player to watch. The 6’8″ wing has a 7’2″ wingspan and was the first player to have a block rate of over 6% and steal percentage over 4% since Matisse Thybulle in 2019. Look for Eason to impose himself physically and take advantage of transition opportunities.

The Rockets also jumped at the opportunity to trade up and add TyTy Washington with the 29th overall pick. The Kentucky guard was once projected as a lottery pick but saw himself slide on draft day. The 20-year-old averaged 12.5 points, 3.9 assists, 3.5 rebounds, and 1.3 steals in his lone season in college. Washington also connected on 35% of his three-point attempts while launching 3.3 three-point attempts per game

The concern with Washington was his lack of athletic pop and unclear positional fit. While he set the Kentucky record by tallying 17 assists in a game, he has looked most comfortable when creating his own shot. The shifty guard has an intriguing mid-range game and an effective floater. Look for him to squash some doubt about his NBA fit and make a positive impact in the summer league. Washington is a fun player to watch and will have a chip on his shoulder heading into the event.

The summer league is not only for rookies. A few other young players with NBA experience are on the Houston summer league roster. The two most notable players are Josh Christopher and Usman Garuba. Christopher had some really nice flashes last season which he will be hoping to build off. The 20-year-old averaged 7.9 points, 2.5 rebounds, and 2.0 assists in his rookie season. He also had some really nice flashes on the defensive end which is encouraging moving forward. Christopher still has some growing to do in his game and the summer league is a great place for him to continue with his development.

He was electric! He couldn’t have given himself a better birthday present than this.pic.twitter.com/tUnpP8Woev

After being drafted with the 23rd overall pick last year, Usman Garuba was a bit of an unknown. He played with Real Madrid in Spain and was looked at as an intriguing defensive prospect. The 20-year-old still has a ton of growing to be done and played just 239 minutes with the Rockets last season. He played in 24 games but showed some intriguing assets. Garuba needs to continue to progress in his development and is sure to have a larger leash in the summer league. While defense will likely always be his calling card, improving on the offensive end will open the door to him being able to handle more minutes.

These five players are likely to take the spotlight. But, there are other appealing players to keep an eye on for the Rockets. Eric Gordon’s younger brother, Eron Gordon, is a member of the roster this year. The 6’3″ guard spent two seasons at Seton Hall before transferring to Valparaiso. Gordon is not as highly touted as his brother but will have an opportunity to prove himself in summer league.

Another fun player is watch is Daishen Nix. The former G-League Ignite standout has an intriguing style of play. Nix played in 24 games with the Rockets last season. He was criticized for being overweight during the season leasing up to the draft and went undrafted. The 6’4″ point guard has the feel of an NBA talent and will be prepared to put his skills on display. The former 5-star recruit will certainly be doing his best to prove himself and deserves a fair evaluation.