In the Houston Rockets’ 114-107 win over the Orlando Magic, James Harden recorded 60 points, 10 rebounds, and 11 assists to notch the NBA’s first ever 60-point triple-double.

James Harden is the only player in NBA history to record 60 points and a triple double in a game. pic.twitter.com/ksCNnk7Xsg

Entering the game against the Magic, the Rockets were already limping sans the services of point guard Chris Paul who had suffered a groin injury in their game against the Phoenix Suns. Furthermore, defensive-minded swingman Trevor Ariza was also out as he nurses a hamstring injury that is expected to force him to miss the entirety of Houston’s upcoming road trip.

Shooting guard Eric Gordon was supposed to help Harden in carrying the cudgels for tonight’s game, but the reigning 3-point champion failed to finish the game, making an early exit after experiencing some tightness in his lower back.

Fortunately for the Rockets, Harden was up to the task and he obliterated the stat sheet with one of the greatest performances in NBA history. 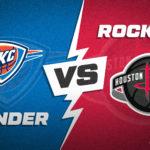 It seems like January has been a favorite month of Harden when it comes to history-making effort. Towards the end of January last year, the multiple-time All-Star tallied 51 points, 13 rebounds, and 13 assists in a win over the Philadelphia 76ers, which was his second 50-point triple-double of the 2016-17 season — another first in NBA history.

What’s even more impressive about this already mind-boggling stat line is that Harden also contributed on the other end as he finished the game with four steals and a block. Another interesting part of his line is his turnovers, which was surprisingly limited to only five — considering the usage that Harden had all throughout the game.

The Rockets may not be that close to the top-seeded Golden State Warriors in the overall team standings, but they’ve already proven that they can match the defending champions’ firepower on any given night.