Harden is yet to speak with Howard about his free agency, possibly coming back to Houston

Given his past relationship with new Rockets head coach, Mike D’Antoni, it seems very unlikely that Dwight Howard will remain in Houston after opting out of his contract with the franchise.

Really, the D’Antoni signing was just the icing on the cake. Howard’s relationship with former MVP runner-up James Harden deteriorated from the time he came over to the Rockets, with both players reportedly trying to get the other traded after a first round playoff exit in 2014.

Even though Harden recently said that he’d like to have Howard back on the squad next season, he hasn’t made much of an effort to persuade Dwight to stay.

“He’s his own man, he knows what’s best for his career,” Harden said Thursday. “I haven’t really talked to him, he’ll make whatever is the best decision (for him).” 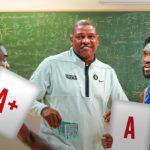 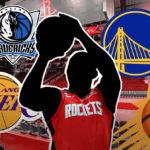 If Howard walks, as we presume he will, the Rockets will end up with nothing in return for one of their biggest assets. Reports indicated that Houston did shop D-12 prior to the trade deadline, but none of the offers received by general manager Daryl Morey were enticing enough to make a move.

To be fair, even if Harden did try to convince Howard to stay, it likely wouldn’t make much of a difference at this point. Everything during his tenure in Houston, from the drama with Harden and the coaching staff to his struggle to fit into their offensive scheme, has led to his expected departure.