The Detroit Lions sent Quandre Diggs to the Seattle Seahawks in a move that didn’t sit well with Darius Slay. Immediately after the move was announced, Slay blasted Detroit for trading Diggs to the Seahawks.

This some bull shit here🤦🏾‍♂️

Diggs and Slay were close friends in the secondary; playing on the Lions together since 2015. Therefore, it’s likely that the veteran cornerback is upset to see Diggs go to another team.

Since the team drafted Diggs in 2015, the safety out of Texas has started in 40 games for the Lions. In the 65 games he’s played in, he’s totaled 229 tackles, three forced fumbles, 24 deflections, and six interceptions.

This season alone, he’s started in five games and has only managed to get 20 tackles. Despite his play, it’s still worth asking why the Lions decided to move Diggs and a seventh-round pick for a fifth-rounder from Seattle. 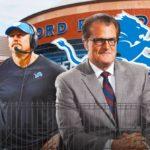 Nevertheless, the organization seems to have rubbed Slay the wrong way with the move. Slay has been with the Lions since 2013 and has been one of the best cornerbacks in the NFL since.

While he’s been in Detroit, Slay has collected two Pro-Bowl bids and has been named an All-Pro once. Could trading Diggs cause the seven-year cornerback to request a trade himself? Considering he’s a crucial piece to Matt Patricia’s defense, it’s unlikely that the Lions would return any calls that involved Slay.

However, we’ve seen Jalen Ramsey recently force his way off of the Jacksonville Jaguars. Also, the Lions are 2-3-1 and are in last place in the NFC North with Kerryon Johnson going on injured reserve. As of now, it’s unlikely that this causes anything to happen between Slay and the Lions.