Former NBA star Kenyon Martin has remained one of the more outspoken personalities in the basketball community since his retirement in 2015, and he has an interesting take on the Oklahoma City Thunder electing to trade Paul George and Russell Westbrook

After the BIG3 held a showcase in Oklahoma City on Sunday, Martin told Erik Horne of The Oklahoman that he felt the Thunder organization was doing the fans a disservice by trading away their star players.

“They (fans) put in their hard-earned money,” Martin said. “When you’ve got two bonafide superstars, when you’ve got pieces in place, for you to just throw the towel in on the fans like that, that’s not right at all.

“They must know something I don’t. You can’t take all those picks with you, so we’ll see what they’ll do.” 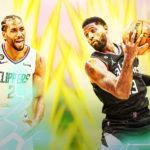 Martin’s take is curious, especially because he seems to have neglected the fact that both George and Westbrook wanted out of Oklahoma City. Not to mention, the Thunder were coming off their second straight first-round playoff loss and had little opportunity to improve the roster because they were handicapped by the luxury tax.

Although Martin may have his personal criticisms of the moves, Thunder general manager Sam Presti has since been lauded by executives around the league for his ability to spin an apparent negative into a positive.