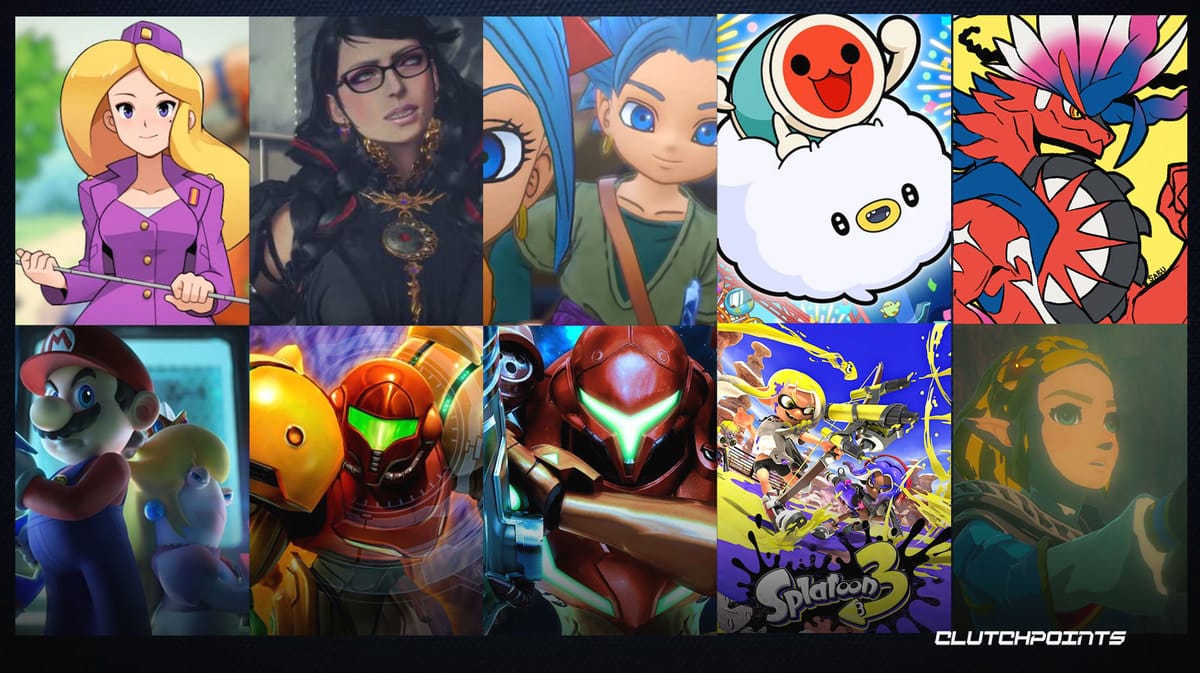 Nintendo continues to produce and publish great exclusives for the Nintendo Switch, and this list of the top 10 upcoming Switch exclusives aims to put a highlight on these games. While the big-ticket games like the Legend of Zelda: Breath of the Wild sequel and the Metroid Prime games are still long ways off, we’re still optimistic with the Nintendo Switch’s future in terms of its lineup of exclusive games. Here are the games you should be looking out for on the Nintendo Switch.

The next game in the Splatoon series was first announced during the February 2021 Nintendo Direct with a trailer. It was slated for a Summer 2022 release as a Switch exclusive, before its release date was officially revealed to arrive this September. In Splatoon 3, players can expect to paint their way through the Splatlands, a new sun-scorched desert area. Additionally, the game will feature new stages, maneuvers, and weapons – including a new bow-shaped weapon to sling ink with. Series fans will be able to enjoy 4v4 Turf Wars, which are also making a return. The cooperative Salmon Run game mode is also making a return, which will now feature new bosses and the ability to throw salmonid eggs to allies and to the base alike. The game promises to feature even more extensive character customization options. Players may choose to be an inkling or octoling from the start, with both having new hairstyles and cosmetic options. For more details on Splatoon 3: Return of the Mammalians, you can check out our article here.

Taiko no Tatsujin returns with a brand-new title, this time available with a physical release in the United States! In Taiko no Tatsujin: Rhythm Festival, players get to experience taiko drumming right at their very homes. Journey to become a Taiko Master with up to 76 songs in the game and hundreds more online, there is a song for everyone to enjoy. Players can also invite their friends with up to 4 players in Donkatsu Toy Wars and Donchan Band.

Bayonetta 3 was first announced during its teaser reveal back in 2017. The latest Nintendo Direct finally gave us some more information on the game, and more importantly, the first look at gameplay, which you may view from the trailer above. It’s been a long wait for Bayonetta fans but we’re finally getting the game this October 2022. Bigger fans can even take advantage of the Collector’s Edition of the game – dubbed the Trinity Masquerade Edition – to take home not just the game, but also some really amazing collectible items to celebrate the Umbra Witch’s third game.

A new Dragon Quest spin-off will be arriving later this year, featuring the younger versions of Erik and his sister Mia from Dragon Quest XI. In this game, Erik and Mia are adventuring on their longship until they encounter a pair of otherworldly creatures, Porcus and Purrsula, and are whisked away to a mysterious place known as Draconia – a legendary land full of treasures just waiting to be discovered. Draconia is a whole new world to explore and discover, and the player will be able to switch between the siblings at any time during their quest. Befriend and recruit monsters into your party, and discover the secrets of Draconia, before finding your way back home safely.

Surprisingly, even though Game Freak already released an impressive new game this year in the form of Pokemon Legends: Arceus, the studio isn’t resting on their laurels and are instead gearing up for another release. Pokemon Scarlet & Violet is the next mainline game in the Pokemon franchise and will be coming late this year. There isn’t a lot of news about this game yet, but we already have seen the game’s starter Pokemon in its reveal trailer. Which one will you choose as your partner?

Metroid Dread brought us back to the old-school Metroidvania formula of the Metroid series, but for some fans, it’s nothing more than just a little sideshow. For others, the real deal is Metroid Prime 4, the next game in the first-person-shooter line of Metroid games. First revealed at E3 2017, Metroid Prime 4 has gone quiet ever since, but some small changes in Retro Studios’ Twitter account have fueled speculations that the game will be revealed in full soon. It’s just about time, after all. However, the team still continues to work in the shadows, being quiet and mysterious about Metroid Prime 4.

The Legend of Zelda: Breath of the Wild sequel actually has no official name yet, but everyone’s understandably already hyped for it. For good reason as well, since Breath of the Wild is a genre-defining masterpiece, with several big games taking cues from it since its release in 2017, including Elden Ring. It especially made waves in the Open-World genre, where you can see it was clearly taken as inspiration for games such as Genshin Impact and even PlayStation’s Ghost of Tsushima. The upcoming Nintendo Switch exclusive was first revealed with a trailer at the tail end of Nintendo’s 2021 E3 Direct and was definitely one of the stand-outs of the show. The trailer shows off the game’s insane verticality, some new combat and traversal mechanics, and an ominous new threat. Unfortunately, Nintendo has recently revealed that this game isn’t coming until 2023.

Metroid Prime Trilogy is set for a remake, says rumors. The remake might be coming out this Holiday 2022, the rumors say. However, Nintendo nor Retro Studios have neither made any official announcement regarding the game yet nor are the developer and publisher planning to release a remaster or remake at all. But rumors will continue swirling as long as there has been no definitive statement that such a project does not exist. Hence, fans continue to await this upcoming remaster or remake trilogy.

The unlikely partnership between Ubisoft and Nintendo continues in this crossover that nobody ever anticipated. Mario and the Rabbids are back with more tactical turn-based strategy challenges, and this time the stakes are even higher: Mario and the Rabbids now have to work together to save the entire galaxy! The first Mario + Rabbids game proved that this idea could work, so we’re only hoping that more people would give this second title a shot.

Advance Wars 1+2: Re-Boot Camp has been delayed indefinitely, and Nintendo hasn’t announced yet when we could expect the game to come out. That only makes the game even more hotly-anticipated by fans. The game leaked before, which allowed fans to catch a quick glimpse at what the game could be like, and the fans have been pleasantly surprised. Now, the hunger for the remake of the first two Advance Wars games is even stronger, and fans couldn’t wait any longer for this remake collection to come out.

Whatever you’re waiting for, it’s looking like a particularly exciting time to be a Switch owner, that’s for sure. There’s a breadth of many different genres and a plethora of different experiences available in the next few months. Nintendo’s pillar franchises of Mario, Pokemon, and Zelda all have titles in the works.

And that’s our list for our Top 10 Nintendo Switch games that we’re looking forward to – games that aren’t coming to consoles. Which ones are your most anticipated? Looking for the same lists for Xbox Series X, PC, and the PS5? Then check them out below: