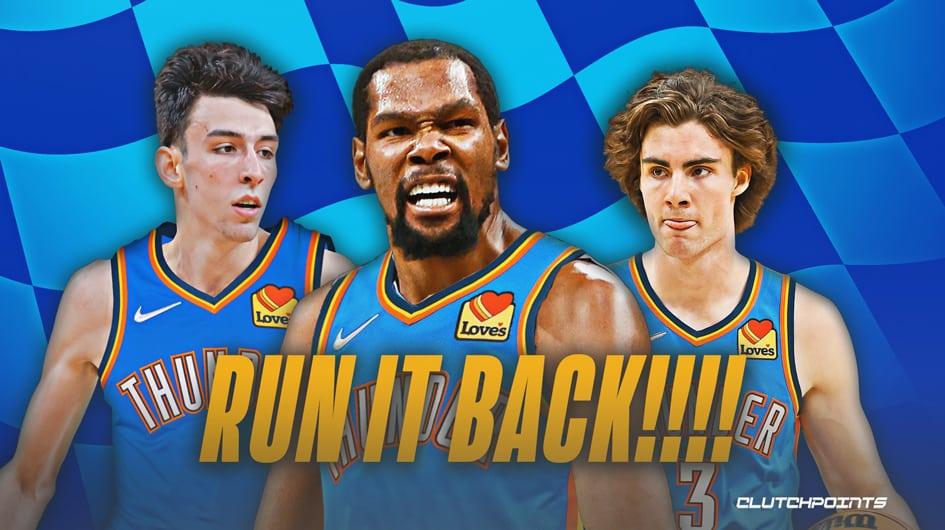 With no cap space left and no real urgency to compete for a title this coming season, the Oklahoma City Thunder may look done in 2022 NBA free agency.

Up until this point in the free agency process, the Oklahoma City Thunder have focused on taking care of their own players. They decided to keep Lu Dort for the long run, signing him to a five-year, $87.5 million contract. After that, they also hired back Mike Muscala for a year, presumably to help mentor golden rookie Chet Holmgren.

Now, the Thunder currently has 20 players under contract for the next season. That means that even though there are still a lot of young players available in the market, the Thunder don’t have the space. They are now above the cap and surely don’t want to pay for a luxury tax squad in a rebuilding year. Because of that, even though big-name guys like Collin Sexton and Deandre Ayton are still available, it would cost an arm and a leg to get either. Sure, both Sexton and Ayton are prospects who kind of fit OKC’s rebuilding timeframe. Sadly, they are no longer on the table.

Even one of their other draft picks, big man Jaylin Williams, might not be signed thanks to the full house already have.

There is one intriguing possibility, though.

If the Thunder are still going to make a move in the offseason, they might as well rock the entire league.

Get Kevin Durant back to where it all began.

Sure, many Thunder fans probably won’t want that. In addition, maybe getting a 33-year-old who’s played a combined 90 regular season games over the last two years isn’t very smart.

But maybe it is. Keep in mind that Durant will never publicly say he wants to run it back in OKC. A seemingly harmless tweet directed at Chet Holmgren, however, might have some subtext.

Chet Holmgren made his debut wearing No. 7 and the Nike KD 15 and Kevin Durant was loving it 💯 pic.twitter.com/LnKdx9M7zv

Frankly speaking, Oklahoma City is a much better space than Brooklyn. There’s no drama, just a lot of excitement. It’s the kind of excitement Nets fans wanted to feel when Durant came over in 2020. Durant should be eager to move on.

All the leverage is with Joe Tsai’s Nets in any trade scenario, but the Thunder have the assets to match. OKC can possibly put together a trade package that includes a young star, a serviceable role player, and certainly more than one draft pick. That might be just enough to bring KD back for the next four years of his career — maybe his last four years in the league.

Truth be told, adding Durant propels the Thunder into championship contention. Durant would also have the chance to further his legacy. It would be a helluva good story for him to win where people thought he could never win. No Steph, Kyrie, or Harden. Just KD and these kids.

Right now, many think of Kevin Durant as a mercenary. Some say he didn’t deserve those titles. That narrative would change if he can bring a ring to Oklahoma City.

At what cost? Well, the aforementioned young star would be Shai Gilgeous-Alexander, who is 23 years old and in the first year of a max deal.

The dutiful role player? That should be veteran Derrick Favors, who’s set to make around $10 million this coming season. The picks? Maybe first rounders in 2023 and 2025? At least.

Doubters may say that Gilgeous-Alexander is the Thunder’s most valuable asset. That’s true, but the Thunder would be replacing him with Durant to play alongside an exciting young core in Josh Giddey, Chet Holmgren, and Dort.

In a year or two or three, that could be end up in a parade in downtown OKC.