With Kyrie Irving set to miss the upcoming season due to his stand on vaccines, the Brooklyn Nets’s quest to win the championship just got harder. Although winning the title isn’t impossible, the added load on Kevin Durant and James Harden is one they shouldn’t have to carry in the first place. Thankfully, rookie Cam Thomas looks ready to step up to the challenge.

While the season hasn’t started yet, there’s good reason to believe that there’s a diamond hiding in the rough in Brooklyn’s lineup. We take a look at the potential of Thomas and why collectors should keep a close eye on him during his first year in the league.

Cam Thomas Can Get Buckets

Those who doubt Thomas can contribute on the offensive end of the court right from the get-go shouldn’t worry at all. For one, the rookie’s lone collegiate season playing for the Louisiana State University Tigers saw him being named to the First Team All-SEC after leading the league with 23 points per game.

After his one year in college was done, Thomas declared for the 2021 NBA Draft, where the Nets nabbed him using the 27th pick. From there, Thomas didn’t miss a beat by doing what he did best in LSU – score.

In three preseason games wearing a Nets jersey, the 20-year old shooting guard averaged 16.8 points on 50% shooting from both the field and beyond the arc. He also added 2.3 rebounds and 1.3 assists in an average of 14.1 minutes during those three contests.

As impressive as those numbers can be, Thomas’s preseason game against the Los Angeles Lakers was the exclamation point his NBA debut needed. In that game, the rookie notched 21 points and four rebounds to help the Nets win against the Purple and Gold.

Without a doubt, Brooklyn will count on Thomas to deliver buckets, especially if Durant or Harden aren’t available. If he manages to replicate his preseason performance, the rookie’s stock in the card market will definitely rise.

Just a few weeks back, most fans and pundits expected the Nets to come out on top of the Eastern Conference to win the title this upcoming season. That projection has somewhat grown weaker because of Irving’s decision not to get the vaccine and Brooklyn’s decision not to have him play at all. While this isn’t good for Uncle Drew, Thomas will benefit from his absence.

The rookie scores 7 PTS in the final 2:01 to propel the @BrooklynNets to the #NBAPreseason win! pic.twitter.com/R8UhhMUH9M

With Irving out for the foreseeable future, Harden is expected to start and run point for the Nets. This will also open more minutes in the backcourt for the likes of Patty Mills, Jevon Carter, and Bruce Brown, among others. But while those guys bring something to the table, Thomas’ knack for scoring can set him apart from everyone else on the Nets’ roster. Again, if the rookie gets to hit those shots, the franchise will entrust more minutes to him down the line.

As of now, Panini hasn’t released cards that feature Thomas in his Nets jersey. What’s available in the market are the company’s Chronicles Draft Picks cards that feature the rookie in his LSU Tigers uniform. One such example is this Optic Rated Rookie Red Prizm card numbered 121 out of 149 copies, which recently sold on eBay for $25. 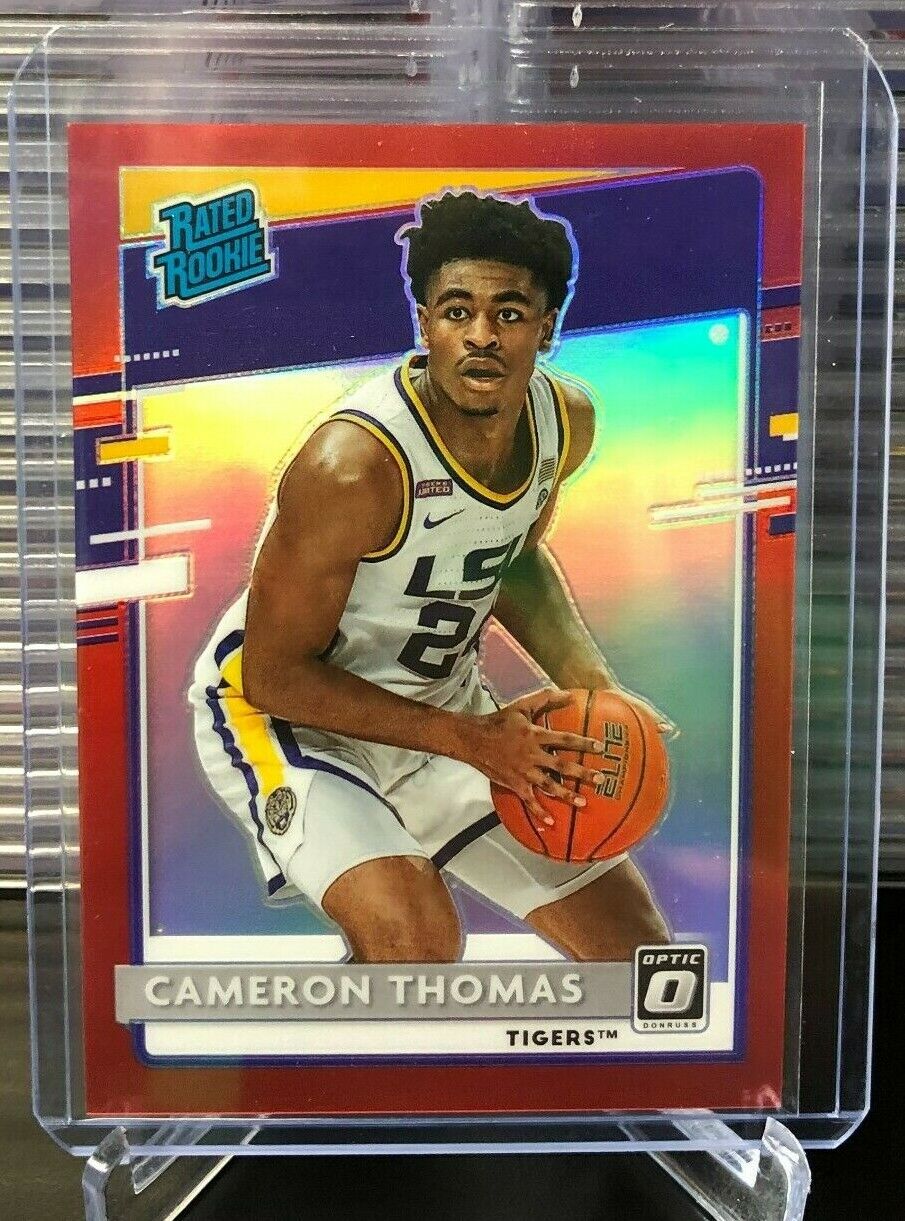 Those who are looking forward to getting Thomas’ rookie cards will have to wait until early next year. Until that time, collectors will have to keep a close eye on this young player to see if he can make the most out of his promising situation in Brooklyn.