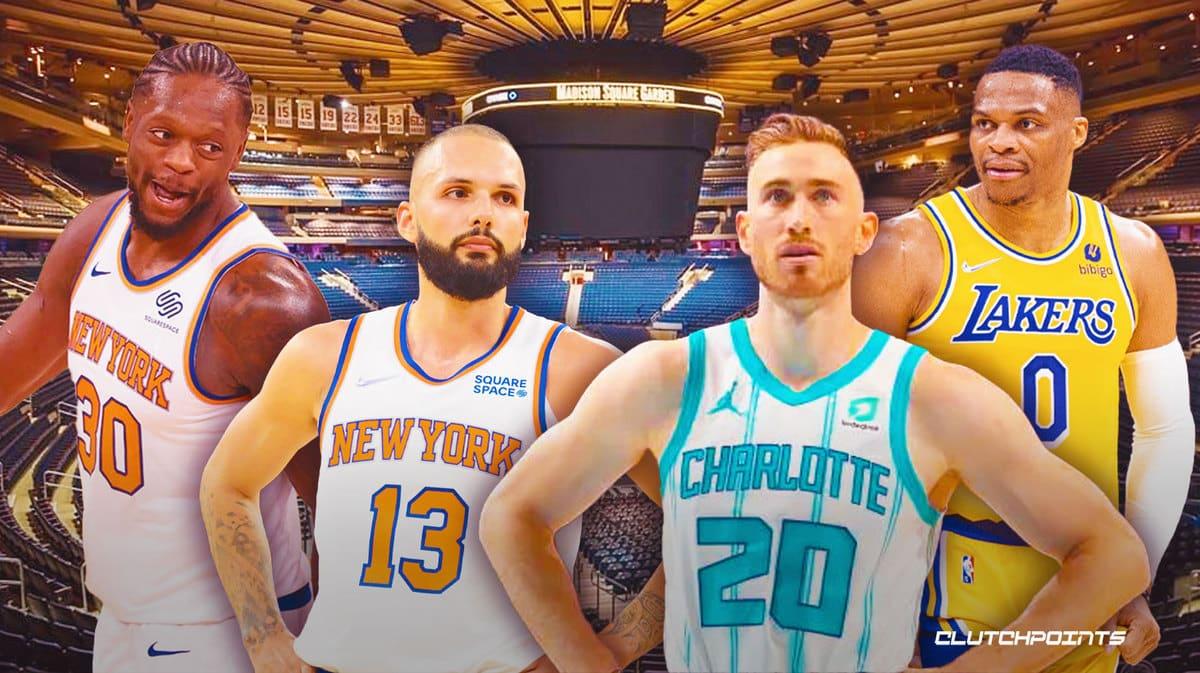 The New York Knicks failed to obtain three-time All-Star Donovan Mitchell, much to their fans’ chagrin. That doesn’t mean, however, that the Knicks are done for the offseason. They can still certainly make a trade between now and the start of the 2022-23 NBA season. In fact, there may just be a couple of possible trades that make sense for the Knicks organization moving forward and that could also appease their rabid fanbase.

One figure who remains on the trading block is none other than Julius Randle. His first All-Star appearance and Most Improved Player award came in the 2020-21 season, but his performance really dipped in the 2021-22 season. Despite averaging 20.1 points, 9.9 rebounds, and 5.1 assists per game, the forward visibly struggled and failed to carry the Knicks to the postseason.

The Knicks also acquired free agent point guard Jalen Brunson in free agency. This makes three players in New York’s starting lineup who prefer to have the ball in their hands to be really productive (Brunson, Randle, and RJ Barrett). Randle, as a ball-dominant player, will have to embrace an off-ball role, which is extremely unlikely and could affect his production even more.

Looking ahead, the Knicks would also do well to acquire more draft stock. This would increase their chances to land more promising young building blocks for their future.

Having said that, here are 2 way too early Knicks trades New York needs to pull off after they failed to get Donovan Mitchell.

Because the Knicks did not trade for Mitchell, Quentin Grimes should take over as the team’s starting shooting guard. This is in lieu of Evan Fournier, which may encourage the front office to find a new team for the Frenchman.

Enter the Charlotte Hornets. Their only big move this offseason has been to re-sign Cody Martin to a four-year, $32 million contract.

Take note as well that Miles Bridges was arrested in June on a felony domestic violence warrant in Los Angeles. He’s a restricted free agent with an uncertain future in Charlotte. With the Hornets potentially going forward without Bridges, Fournier and up-and-comer Cam Reddish might be of interest.

Gordon Hayward signed a four-year, $120 million contract with Charlotte in November 2020, so he has two guaranteed years before becoming an unrestricted free agent in 2024. His name has been in the midst of a couple of trade speculations, too.

The Knicks acquiring Gordon Hayward is also a viable option if they intend to trade Julius Randle, which we’ll discuss shortly. Hayward would also provide the Knicks with a decent shooter who has a history of dominating games, but his injury history is troubling. However, if Hayward can remain healthy and contribute as a scorer off the bench, it may be a beneficial trade.

Adding Mcbride also sweetens the deal for the Hornets while also providing the needed cap space for the Knicks to acquire Hayward.

Getting Hayward also makes sense if the Knicks are able to pull off a Randle deal.

If Julius Randle is dealt, it appears one option is to return to the team that drafted him in 2014. Keep in mind that the Jazz sending Donovan Mitchell to the Cavaliers impacted not just the Knicks but also the Los Angeles Lakers, as a potential three-team trade was nixed. As of now, Russell Westbrook remains on the Los Angeles Lakers roster.

The goal of this deal is not to keep Westbrook in New York. It’d be a way for the Knicks to get rid of Randle while also receiving draft assets.

The only way New York should consider trading for Westbrook is if the Lakers include at least two of their first-round selections. In this scenario, the Lakers would not only acquire Randle, but also Derrick Rose.

New York would be free of both Randle and Rose’s contracts, would receive two first-round selections, and would buy out Westbrook. This transfer will also provide Obi Toppin with the playing time he deserves, which has been requested by Knicks fans.

If the Knicks are willing to let go of Randle without tanking their depth too much, the front office may contemplate these two trades. If the Knicks don’t deal Randle before Oct. 19 and doesn’t perform as expected, then New York may decide to let him go during the season.

What’s important right now is for the Knicks to build around their core of Brunson, Barrett, and Mitchell Robinson while also looking to add depth in their future via the draft.