Boston Celtics superstar Jayson Tatum had a lot of time in the offseason to think about his struggles in the NBA Finals and the image of Golden State celebrating their fourth championship in eight years on his home court. He said prior to the new season that the Finals disappointment fueled him to get better this year, and it’s shown.

The Cs are currently on a five-game winning streak and boast the highest-scoring offense in the NBA, and those successes have Tatum’s fingerprints all over them. The 24-year-old is averaging insane numbers so far, putting up 31.4 points and seven rebounds per outing.

The league has noticed Tatum’s scorching start, too, as he recently came in third on the 2023 Kia MVP ladder:

And these rankings came out just before he dueled Nikola Jokić and the Denver Nuggets, a game in which Tatum scored 34 points to the two-time MVP’s 29 while leading the Celtics to a 131-112 win. His ability to outplay the two-time reigning MVP will only help him move up the 2023 Kia Most Valuable Player shortlist.

While the award’s announcement is several months away, it’s impossible to ignore Tatum’s rise to the NBA elite. So here are three reasons why he’ll bring home the Maurice Podoloff Trophy this season.

Tatum’s offensive ability was always apparent, but his scoring has been on a different level during the 2022-23 regular season.

He’s averaging 30-plus points per game and doing it in a variety of ways. The small forward is connecting from deep reliably, hitting his step-back consistently, and getting tough finishes with ease.

In addition, Tatum’s doing the little things, like driving to the hoop in order to get to the line more. Through 12 games he’s averaging 8.9 free-throw attempts, while last season he only had 6.2 attempts per outing. When the former Duke standout has struggled to score from the field, he’s been able to draw fouls and generate easy offense from the charity stripe. It’s not showy, but it’s made a big difference in his offensive game.

Most importantly, Tatum is putting up incredible offensive stats while remaining efficient. From the field he’s shooting an impressive 50%, which is well above his career 45.8 field-goal percentage. Although that number will likely dip as the season lengthens, it displays how Tatum has developed from his rookie year to become an efficient superstar.

What Tatum does on offense is often lauded, however his defensive game shouldn’t be overlooked. The 6-foot-8 forward can guard almost any position and has taken a leap forward with his shot-blocking.

Tatum is averaging 1.7 blocks per game, compared to his career average of 0.7, and is swatting shots from some of the NBA’s best like Ja Morant:

Tatum’s defense has been LOUD this year. Often doesn’t get the credit because of how elite he is off ball. But this year he’s making sure everyone knows. pic.twitter.com/nWcVaR64ux

With Robert Williams III sidelined due to injury, Tatum has been carrying additional rim-protecting duties. Of course, there’s only so much he can do compared to an elite rim-protector like Williams, but so far this season he’s been doing his part on both sides of the floor.

That type of two-way play is what made former MVPs like Giannis Antetokounmpo, LeBron James and even Kevin Garnett, and if Tatum keeps up his versatile defense his case for the coveted award becomes a lot stronger.

As one of the oldest and most storied franchises in the NBA, the Boston Celtics have plenty of prestigious records. And although it’s only been 12 games, Tatum has already done things this season no other Celtic has. 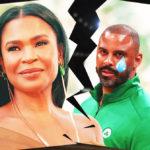 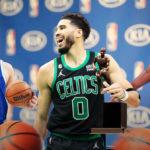 For example, he became the only player in franchise history to score 8,000 points before turning 25. Many of the other Celtics who approached that mark are Hall-of-Fame inductees.

Plus, after Tatum’s Friday night performance against Denver, he became the only Celtic besides the legendary Kevin McHale to score 20 points in each of Boston’s first 12 games in a season.

Tonight Tatum also joined Kevin McHale (1986-87) as the only BOS players to score at least 20 points in each of the team's first 12 games in a season pic.twitter.com/WWo81C6eRX

These franchise records are amazing feats, but Tatum has also broken league records as well. He just became the youngest player ever to score 8,000 points and hit 800 triples, and he did it faster than anybody before him.

With his record-breaking start and excellent performance on both ends of the court, the Tatum MVP talk is undeniable. There’s still a lot of season left, but if he continues to play at this elite level there could be more than one trophy in his future.