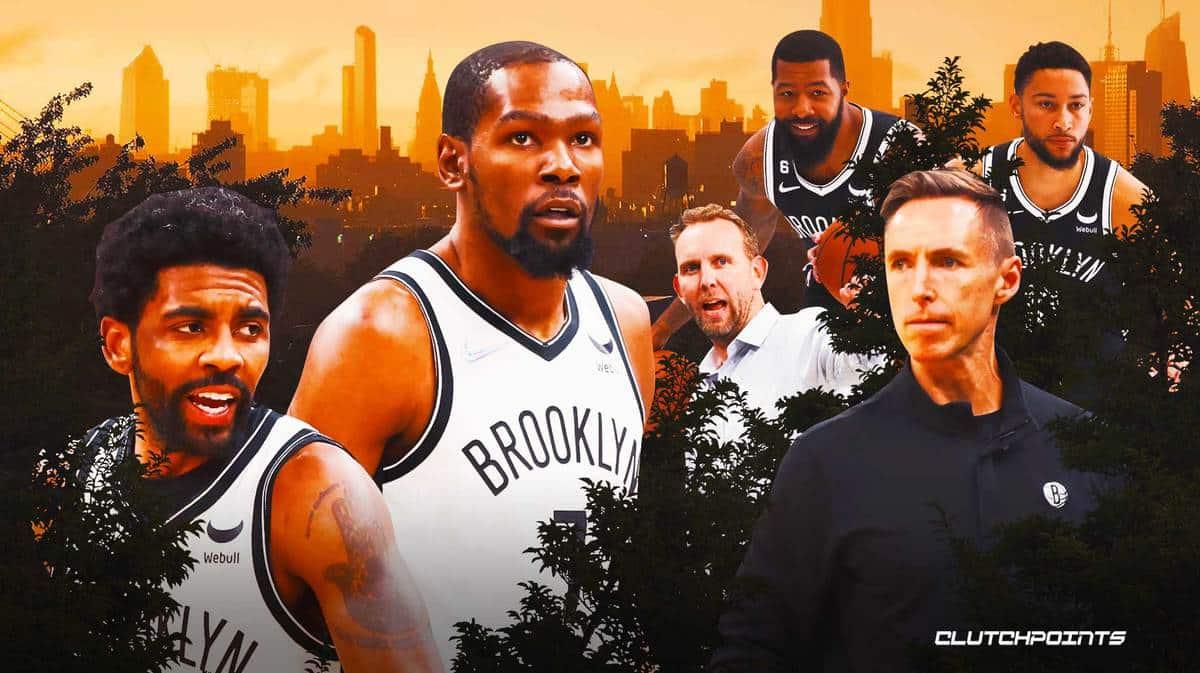 Nets players, along with General Manager Sean Marks and Head Coach Steve Nash, spoke on the tumultuous past few months in a series of press conferences. Here are five takeaways from what they had to say.

5. Markieff Morris is stepping into a leadership role

Markieff Morris’ signing in Brooklyn largely flew under the radar this season. This is understandable as he comes to the Nets on a one-year, non-guaranteed contract. However, it appears the Nets have significant expectations for the 11-year veteran.

Marc Stein reported the Nets considered signing Morris significant to the point where owner Joe Tsai made a personal recruiting pitch to the 33-year-old. When addressing the media Monday, Morris said that he and General Manager Sean Marks had been in contact since early in the summer. He added that Brooklyn showed the most interest in him of any team.

When asked about what he saw from the Nets last season, the 33-year-old said he thought the team was lacking a vocal leader.

Morris won a championship with the Lakers alongside LeBron James and Anthony Davis in 2020. He was a key piece of Los Angeles’ bubble playoff run, shooting 42.0 percent from three on 3.3 attempts per game. He projects to play a small-ball five role with the Nets this season. Marks spoke highly of the veteran when asked about their relationship.

“I think what he’s done in the past speaks for itself,” Marks said. “With the toughness that he’s going to bring to our group. We needed veteran leadership. He’s vocal and I love that. Somebody who’s not afraid, not just to hold people accountable, but to bring the group together.”

Markieff Morris would like to make sure the record reads clearly – he's a tough guy. pic.twitter.com/rdwUWUa8uR

4. Ben Simmons is not concerned with narratives

Ben Simmons’ debut for the Nets is one of the top storylines surrounding the 2022-23 season. The 26-year-old has heard all about his basketball deficiencies, his mental state, his decision to sit out last season, and more. When asked if there are any frustrations regarding the narratives surrounding him, Simmons promptly cut the question off.

“I don’t care about narratives,” Simmons said. “I don’t care about people saying certain things because I can’t control that. All I can do is focus on what I can do on the court, win games, and help this team win a championship. That’s the end goal.”

Simmons steps into a basketball situation alongside Kyrie Irving and Kevin Durant unlike any thus far in their career. The two-time all-defensive first-team selection was non-commital on a specific role with the Nets, saying he expects to affect the game in several ways.

“I just want to go out there and impact the game in any way I can,” Simmons said.”Whether it’s setting a pick, passing the ball, scoring the ball, getting a stop, rebounding the ball, or getting a block. There’s so many ways you can affect a game, it’s not just scoring, it’s not just defense. But for me, I feel like I cover most of those things.”

The former number one pick underwent back surgery in May. He said he has been fully cleared ahead of Brooklyn’s first practice Tuesday.

3. The Nets are going to push the pace

The team’s pace of play has been a recurring theme in Ben Simmons’ comments since being traded to Brooklyn. In his introductory press conference, Simmons spoke on his fit alongside Irving and Durant and alluded to a fast-paced Nets offense.

Fast forward more than seven months later and Simmons is still emphasizing pace when speaking about his fit with the Nets.

“I think we got a team that wants to run,” Simmons said Monday. “Guys that can make plays, push the ball, get out in transition.”

It’s easy to see why this would be a focus for Simmons in Brooklyn. The three-time All-Star’s ability to run and facilitate are among his top strengths. Simmons can act as a grab-and-go point guard off of defensive rebounds, a role he found great success in with Philadelphia. Per Synergy Sports, Simmons averaged 2.7 assists per game in transition in 2020-21, the second-most of any player in the league.

Brooklyn ranked 11th in pace last season. That number should be higher this year with Simmons orchestrating the break alongside playmakers such as Durant and Irving, as well as high-level shooters in Joe Harris, Seth Curry, Patty Mills, Royce O’Neale and more. Harris also referenced pace when asked about Simmons’ fit with the Nets, saying the former All-NBA selection “makes the game easier for everyone around him.”

A heavier transition attack will help to alleviate a portion of the offensive burden on Durant and Irving. It also will not allow defenses to get set, creating advantages in the halfcourt given Brooklyn’s lineup of shooters and isolation scorers. A faster pace of play should be a focal point of the Nets’ offense this season.

Simmons said he had been playing alongside Durant and Irving all of last week. When asked how it looked, he responded with one word:

Irving returns after failing to reach terms on a long-term contract with the Nets this summer. The seven-time All-Star missed over half of Brooklyn’s season last year while refusing to comply with New York’s workplace vaccine mandate. Following his firm vaccine stance and several polarizing comments, the former NBA champion is aware of changes in his reputation.

“I didn’t appreciate how me being unvaccinated came to be a stigma within my career,” Irving said. “A stigma that I don’t want to play, or that I’m willing to give up everything to be a voice for the voiceless.”

When on the floor, Irving is among the top players in the league. The New Jersey native has averaged 27.1 points and 6.0 assists per game on 49/41/92 shooting splits in three seasons with the Nets. However, he’s rarely on the floor, missing more games than he has played in throughout his Brooklyn tenure.

"A sight to see.. a gorgeous display."

Kyrie Irving pulls up for 60 points, the most ever by a Nets player and the most in his illustrious career. pic.twitter.com/3875p2wzyF

He now has 2022-23 to prove his worth if he hopes to secure a max deal next summer. Irving said his contract negotiations and Durant’s trade request forced some much-needed dialogue with Nets management.

Following Brooklyn’s first-round sweep to the Boston Celtics, Irving said he felt he was letting teammates down when missing games. The 11-year veteran said his focus this offseason has surrounded improving as a teammate.

“I try to just center in on what I want to accomplish,” he said. “And that was just focusing on being the best teammate that I can be. And being on a great team and what that means to me and really embodying that action every single day. Not just saying it.”

Irving is singing a different tune at Nets media day this year. It was one of team camaraderie and collective focus on an ultimate goal. Could this finally be the season he avoids controversy and morphs into a leader within the Brooklyn locker room? It’s far too early to tell, but the Nets’ season, and Irving’s long-term contract status, will be determined by the answer.

Kevin Durant’s trade request rocked the NBA this offseason. The months following were filled with rampant speculation and non-stop mock trades. After a stalemate with Nets management, Durant walked back his stance and now returns for the first year of his four-year, $194 million contract. The former MVP spoke Monday on why he asked out of Brooklyn.

“I committed to this organization for four years last summer, with the idea that we were going to play with that group that we kinda went on that little round to the second round with (in the 2020-21 postseason),” Durant said. “I felt like another year of that, us being healthy, we were building something toward the future. Then as the season went on, you saw what happened last season, guys in and out of the lineup, injuries, just a lot of uncertainty which built some doubt in my mind about the next four years of my career. I’m getting older, I want to be in a place that’s stable. Trying to build a championship culture, so I had some doubts about that. And I voiced them to Joe (Tsai), and we moved forward from there.”

A large portion of those doubts appears to have stemmed from the team’s habits amidst heavy uncertainty last season. The 12-time All-Star said he felt his teammates weren’t being held accountable at points during the year.

“I wanted everybody to be held accountable for their habits as a basketball player,” he said. “I think a lot of stuff was getting swept under the rug because we’re injured, or this guy’s not around, or just the circumstances. I thought we could have fought through that a little bit more and focused on the guys that were here a little bit more.”

Durant said he hoped for greater resolve in the face of adversity, something he aims for with himself each season.

“I felt like we could’ve just kept pressing forward,” he said. And that’s what I try to do as a player. I’m not preaching something that I don’t practice. I come in here and every rep matters to me, so I want everybody to feel the same way.”

Kevin Durant on pushing his teammates to become champions: "When adversity hits, can we keep pushing through it?" pic.twitter.com/JuRkspnyNx

Durant cited Brooklyn’s 11-game losing streak while he was out with an injury mid-way through the season, saying he felt “we shouldn’t be losing some of these games that we lost, regardless of who’s on the floor”. He said that added to his concerns about the team’s approach. These concerns appeared to have reached a boiling point when Durant reportedly called for General Manager Sean Marks and Head Coach Steven Nash to be fired in an August meeting with owner Joe Tsai.

Both were refused, leading to the 33-year-old’s eventual decision to return to the Nets this season. The two-time finals MVP said he knows what he wants for his team in 2022-23.

“I feel like we don’t have any respect out there on the court, and that’s what I want for us,” Durant said. “From the GM down to the equipment manager, I want that respect. And you get that by how you work every single day.”

Durant and the new-look Nets had a different vibe about them Monday. The focus was on the future, with the drama of the summer appearing to be in the rear-view mirror. But if one thing that has been evident throughout Durant and Irving’s time in Brooklyn, it is that actions speak louder than words.

The Nets open training camp Tuesday with an opportunity to finally back up their words this season.