Rudolph got into a fight with Cleveland Browns defensive end Myles Garrett on Thursday. Rudolph played his college ball at Oklahoma State, the same school Smart went to:

Besides kickin him in the penis (the most unmanly thing you can ever do) then the eye gouge, and then he ran up. If anyone ever did that to me then it’s curtains. And I don’t even get violent https://t.co/L85S1emUOi

Rudolph learned all his tricks from @smart_MS3! That’s what happens when you attend the OTHER OSU https://t.co/1kGncyb8tF

Clearly, Turner is taking a playful jab at Smart. Turner played his college ball at Ohio State University. Both Ohio State and Oklahoma State use “OSU,” so Turner is just having some fun with Smart.

Turner, who played with the Celtics once, has only appeared in three games this season for the Hawks. He’s currently dealing with soreness in his Achilles. The former No. 2 overall pick is averaging 4.0 points and 2.3 assists while shooting 57.1 percent from the field and 80.0 percent from the free-throw line. 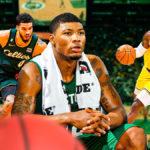 The Hawks acquired Turner this summer from the Portland Trail Blazers in the Kent Bazemore trade. Atlanta is 4-7 on the season after losing to the Phoenix Suns on Thursday.

Smart and the Celtics are 9-1 on the season. They currently have the best record in the NBA. Boston’s only loss of the season came to the Philadelphia 76ers on opening night.