John McCarthy was known as one of the best referees in MMA. The now Bellator commentator and podcaster still weighs in on issues with officiating in MMA.

He recently discussed the referee Vyacheslav Kiselev and the mistakes he made at UFC 267. John McCarthy  discussed it on ‘Unlocking The Cage With Jimmy Smith.’

“I was going nuts. I was standing up in front of my TV, screaming,” Bellator commentator and former referee “Big” John McCarthy said on Unlocking the Cage with Jimmy Smith (transcription via MMAFighting). “Look, if he had just let the fight go on, it’s wrong but it’s understandable and it’s understandable based upon there’s pressure there, he’s trying to let the fight play out and he’s looking at it thinking he’s doing a good job of letting this guy continue on even though he doesn’t realize he’s ruining this guy’s career. The loss is not going to ruin his career, the beat down and the damage will.

“So that was one element and then the eye poke. The way he handled it was so horrendous and so wrong for the fighter, and the fighter that had been beat down. So you’re looking and you go, ‘Come on, you’ve got to be kidding me!’ Then you take a look at the knee, the knee did not hit the groin. Maybe the shin did, and okay that’s fine, but to take a point for it? No, the knee was placed properly and so you just looked at everything he was doing, he was lost, he was in over his head. Everyone thinks it’s easy. It’s not. It takes time to figure out how to get these things and do them right and be good at them so you just flow with how you’re doing it and at that moment, he wasn’t ready for that type of fight.” 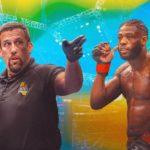 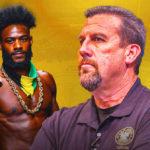 The situation brings up the role of the cornerman and whether or not they should throw in the towel. John McCarthy gives a lot of credit to those that are willing to stop the fight.

“It’s the hardest call to make based upon your love for the guy that’s in that cage,” McCarthy said. “You’re supposed to love that guy, you’re supposed to know more about him than anybody and you know when they are not doing what they need to do to win the fight. You know when they’re not going to win the fight. The biggest thing is, people are afraid to do it because they’re afraid of the fighter saying, ‘You didn’t believe in me’ or they’re afraid of losing their job. But when a guy says, ‘I didn’t even think about it,’ well he also should have said something better than, ‘You’re getting hit too much.’ Really? You didn’t think his fighter knew that at the time?

“That’s why I love the Trevor Wittman’s the John Hackleman’s, they take care of their fighters. They will throw in the towel, they will stop the fight because they know their fighter and they know, ‘Hey, this is it. They’ve given everything they can give, they can’t give anymore, it’s time to get them out.’”