If it wasn’t for Steve Kerr and the Golden State Warriors setting a record with 73 wins, Portland Trail Blazers head coach Terry Stotts probably would’ve won the Coach of the Year award.

Stotts finished as a close second to Kerr with 335 votes opposed to 381. It’s also important to note that Kerr was out for the first half of the season while recovering from back surgery.

LeBron James decided to speak out on the matter with Chris Hayes of Cleveland.com, giving Portland’s head man a big endorsement.

“I think Terry Stotts should have been or could have been Coach of the Year,” James said after practice on Thursday. “I can’t remember the last time that I’ve seen a team lose four starters and still be in the same position as far as the postseason success they had.

“I mean they lost Batum, they lost Matthews, they lost Robin and they lost LaMarcus in the off-season and the only returning starter was Dame [Damian Lillard].”

LeBron’s statement comes on the heels of news that Stotts and the Blazers’ higher-ups are negotiating a contract extension. 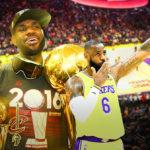 Stotts’ accomplishments speak for themselves. Losing so much of the core yet still managing to win while rebuilding on the fly is quite impressive, and they weren’t an easy out for the Warriors. Nobody expected anything significant from Portland, but they defied the odds.

LeBron recalled a 105-76 defeat for the Cavs at the hands of the Blazers earlier in the season, saying that “(Stotts) coached his a– off.” The Blazers won’t be able to sneak up on anybody next year.