LeBron James’ Nike endorsement deal is worth more than $1 billion

We knew LeBron James‘ endorsement with Nike was worth more than any other the company has ever given. But the deal, which was signed in December, still might be worth even more than anybody originally thought.

Carter wouldn’t reveal exactly how much the deal was for, but he did concede that it was at least 10 figures:

How much was the deal for?
I can’t say.

Come on, Mav! Can you ballpark it?
What are people saying?

Kanye said a billion. So a billion.
[Maverick smiles and points one finger skyward.]

Holy (expletive).
Yeah. It’s a fantastic deal. Nike feels great about the deal. That’s the most important thing. As great as I feel, as great as LeBron feels—Nike feels fantastic about it. It’s the largest deal in the history of the company. Their hope is he makes even more. And our hope is that, too, obviously.

The deal is, unsurprisingly, a record-breaking one for Nike, surpassing that of Michael Jordan‘s massive lifetime deal. LeBron will also be taking the mantle from Jordan in another area, as it was recently announced that the Cleveland Cavaliers star will have the lead role in Space Jam 2, more than 20 years after the original with Jordan was released. 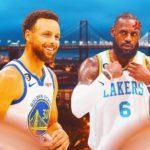 In addition to his blossoming career off the court, James is trying to bring a championship back to Cleveland, as he currently has the Cavaliers in the Eastern Conference Finals against the Toronto Raptors.