We’re nearly there. On Tuesday, the NBA’s 75th anniversary season will tip-off, and the league’s most famous franchise (the Los Angeles Lakers) led by arguably the greatest player of all time (LeBron James) and his team of future Hall of Famers begin what should be a historically fascinating campaign.

As every Lakers player will remind us over and over again: the on-court product will be a work-in-progress — perhaps until May. For now, though, let’s make four bold predictions going into 2021-22.

1) The Lakers will lead the league in fast-break points

LeBron and Frank Vogel have both stated the goal of leading the NBA in transition points. At Media Day and since, Russell Westbrook and Anthony Davis have brought up their eagerness to run together, too.

As sloppy as Westbrook was during preseason (23 turnovers), his ability to ignite transition opportunities was evident and contagious. The Lakers are deploying a “rebound-and-run” mentality, encouraging any rebounder named DeAndre Jordan or Dwight Howard to push it themselves.

In the two warm-up contests in which the Lakers 360° participated. they showed how quickly dialed-in defense can turn into easy buckets.

This will be the Lakers at their best, forcing a turnover on defense and getting out in transition. This was a great pass from Russ with LeBron running the lane pic.twitter.com/oozdeqiFRg

“We want to be the best fast-breaking team in the NBA,” Vogel said. “We have dynamic players, and then adding a guy like Russ and the speed that he brings to the table, we want to support him and get everybody running. That’s when we’re going to be at our best, that’s when we were at our best two years ago when we led the league in fast-break points.”

The Lakers were the 22nd best transition team in 2020-21, after being the 2nd the year prior, per Alex Regla.

Yes, the Lakers are revamping their offensive scheme and installing more diverse action. That will take months to jell, though. In the meantime, they know their best path to points — particularly in the regular season — will come with their version of “Showtime.”

“We’ve grown so accustomed, over the years, to having teams keying in on us when we bring the ball in transition,” LeBron said. “Defenses are loading early, not wanting us to get into the paint and break the defense down. Now when both of us are on different sides, if one of us is bringing the ball down and we get the defense shifting on this side — a quick swing to the other side and now we’re able to go without a set of three or four eyes looking at us. It’s just constant pressure that we’re going to put on a defense.”

Russell Westbrook and LeBron James in transition is about to be NASTY 🤭pic.twitter.com/EQfHD5FhQG

2) Anthony Davis will win Defensive Player of the Year

Davis is currently +400 to win Defensive Player of the Year. That has my curiosity.

AD is in his best condition since the bubble and will be supremely motivated following a frustrating 2020-21 season. The Lakers know their ceiling aligns with AD’s two-way dominance, and Pelinka and Vogel have been outspoken about expecting that kind of performance from the newly-married 28-year old.

Pelinka echoed Frank Vogel's recent comments on Anthony Davis, noting the work he's put in over the summer (on his wedding singing, too). Like Vogel, Pelinka is expecting a dominant season from AD. pic.twitter.com/z8Z3FQEhYv

On paper, Los Angeles sacrificed perimeter defense for shot-making with their summer moves. Their wing D was further depleted by the injuries to Trevor Ariza and Talen Horton-Tucker. Westbrook is inconsistent on that end. LeBron won’t give 100% effort until the playoffs.

Vogel prefers to use Howard off the bench. Jordan — a fringe rotation guy — will occasionally start, but Davis will play more 5 than he has since coming to Los Angeles. If the Lakers are able to produce an elite defense, Davis’s backline fortressing will earn the bulk of the credit (seconded by Vogel’s scheme and culture).

Davis hasn’t hidden his desire to win DPOY. Other top candidates will compete against voter fatigue, past-winner syndrome, are injury-prone, or are named Ben Simmons. This season, AD gets it done.

3) Austin Reaves will crack the rotation

Besides injuries and the Lakers’ 0-6 record, Reaves was the story of the preseason — beginning with Media Day’s “Hillbilly Kobe” revelation. It took him six exhibitions to become a Lakers’ folk hero.

More importantly, Reaves has earned the trust of his coach, plaudits from LeBron and Rajon Rondo, and displayed an NBA-caliber two-way feel for the game. HBK has the chops.

“I watched a lot of film on him when we drafted him actually,” LeBron said last week. “I knew right away that he could be an NBA player and play at this level. His size, his shot-making ability, his pick-and-roll play, his passing, a high IQ kid and he’s got a lot of dog in him, too, that translates to our game.” 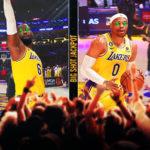 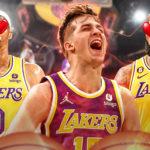 Reaves may not find himself playing bulk stretches in lineups with LeBron, AD, Russ, and Melo on Day One — as he did last Thursday — but he’s going to get opportunities sans Ariza, THT, and Ellington. I predict he takes advantage.

LeBron just called Austin Reaves up from his seat to shoot with him after practice. pic.twitter.com/4XtUfwEQuN

“He has done enough to earn my trust,” Vogel said. “I can say that much. I feel good about everything he does out there. He really competes and knows where to be on a defensive end. The shot-making was a concern, and he’s really shown to be a shot-maker throughout this preseason.”

4) The Lakers will wind up with Kevin Love

I previously opined on this topic, and I steadfastly believe it will happen.

It simply makes too much sense. The Lakers are holding a spot open for a buyout. Love’s had on-court success with LeBron and Russell Westbrook (UCLA). He fits the roster’s identity as an accomplished, high IQ veteran ready to prioritize winning. He’s a Santa Monica native. He fuels fast-breaks with his outlet passing. He fills the void left by Marc Gasol as an elite disher and floor-stretching big — incidentally, the one archetype the Lakers don’t currently possess.

Yes, Love’s camp has said he won’t relinquish money to negotiate a buyout with the Cleveland Cavaliers (a trade is unfeasible). But, they have multiple months of frustrating outings to change their mind and message. After 50ish games of taking a backseat to youngsters like Evan Mobley, Jarrett Allen, and Lauri Markkanen, Love will be ready to pull a Blake Griffin in order to vastly improve his situation.

Final prediction? This is going to be fun.