Michael Jordan‘s 1984 Los Angeles Summer Olympics sneakers are up for bids and it won’t come cheap. This pair, especially, is expected to go for as much as $100,000 by the end of bidding, according to SPC Auctions via TMZ Sports.

Two things make this sneaker a one-of-a-kind item — the first, that it’s obviously not a Jordan or Nike-branded shoe, but a Converse, given that he played in that Olympiad fresh off of his junior year of college, as he readied up for the 1984 NBA Draft.

The second, that this was known as “The Last Golden Amateurs” of the USA Basketball era, given that after 1984, the NBA decided to lend its players to the federation in order to showcase their product internationally.

Funnily enough, future Hall of Famers like Charles Barkley, Karl Malone, John Stockton, and Joe Dumars did not make the cut for this team, led by head coach Bobby Knight.

Jordan led the USA to a gold medal, averaging 17.1 points per game through eight games of competition.

The shoes, showing clear 33-year-old wear and tear, still have the visible signature of the G.O.A.T. right underneath the collar. 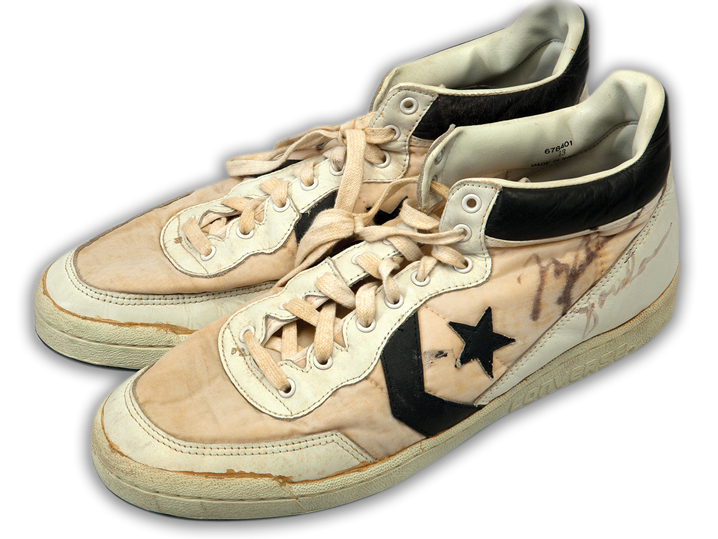 Jordan would soon after sign with Nike prior to starting the season with the Chicago Bulls after being drafted with the No. 3 overall pick in 1984.

Breaking down the best college options for Bronny James

LeBron James is not the right Michael Jordan comparison, according to Charles Barkley

The difference between Gregg Popovich, Phil Jackson according to Bulls’ 3-peat player