The likelihood of a last-minute Russell Westbrook trade for Lakers, revealed Russell Westbrook, by almost all accounts, has overstayed his welcome with the Los Angeles Lakers. LeBron James admitted to hating the situation the team is in right now. Trading Westbrook seems like the most sensible thing to do, but it’s not a simple procedure.

ESPN’s Adrian Wojnarowski said that Rob Pelinka understands the difficulty regarding trading Westbrook. The Lakers general manager will have to deal with his enormous contact and possibly attach picks, which he is reluctant to do.

“With $47 million due [to] him next season, there’s just not a marketplace to do that. The Lakers have shown a real reluctance to incentivize a deal, meaning add draft picks to it. They have picks still going out in other deals.”

Wojnarowski added that the Lakers are pivoting their focus to bolstering their depth around James, Westbrook and Anthony Davis. He offered two names of players that are being shopped by their respective teams.

“Right now, the deals the Lakers are really looking at, they’re around the fringes. Players like Alec Burks in New York. Dennis Schroder in Boston. Any number of role players, fringe starters that they might be able to cobble together the assets to get. But the idea of a Westbrook trade? Nothing is impossible but I think it is highly unlikely.”

Having players like Burks and Schroder as their main targets shows that the Lakers are not extremely confident in their championship odds. Those players don’t move the needle at all. Westbrook, James and the Lakers will have to make some serious adjustments to get back into title contention. 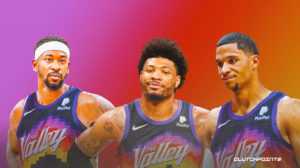