Talk about head-spinning moves. The Miami Dolphins, San Francisco 49ers and Philadelphia Eagles all had roles in blockbuster NFL Draft deals on Friday.

Miami first struck a deal to send the No. 3 overall pick to the Niners in exchange for the No. 12 selection and a pair of future firsts. The Dolphins then sent No. 12 and a 2022 first (plus a pick swap) to the Eagles for the No. 6 overall pick.

How did all three teams make out? It’s time to take a closer look at the moves that could have a major impact on the future of all three franchises involved.

The Dolphins converted the original Laremy Tunsil to Houston deal into a tremendous haul.

They also moved back just three spots in the 2021 draft.

There is no sort of hyperbole that could possibly be used to indicate how big a win this is for a Miami franchise that has seen dark times over the course of the last decade.

The Dolphins are coming off a 10-6 mark in 2020 and have a potential franchise quarterback in Tua Tagovailoa. They now have the opportunity to select a future Pro Bowl-caliber receiver at No. 6 and are likely to have their pick of the litter.

Most importantly, Miami still has ample draft capital in store for future seasons. Chris Grier and Brian Flores are overseeing a tremendous process as the Dolphins build a contender for the future.

Eagles Pivot In The NFL Draft

Ian Rapoport of NFL Network reported the Eagles originally wanted to trade up to No. 3, but would only do so for BYU quarterback Zach Wilson.

There is no guarantee the New York Jets will not take Wilson second overall in the NFL Draft, so the Eagles pivoted. Frankly, it might be for the best.

One thing is very clear: Zach Wilson will go high in this draft. At No. 2? Very possible. And hard to see anyone having enough ammo to move up. https://t.co/U7gAKiJBhj

The Eagles now have an additional first-round pick in 2022 and get a pick swap from the Dolphins in addition to the No. 12 overall pick.

Philly’s most evident need heading into next month’s NFL Draft–if the Eagles did not take a quarterback–was at wide receiver. Any number of top wideouts will still be available at No. 12.

The New York Jets (though the Jets seem to be hinting they will take a quarterback) and Cincinnati Bengals plus the Dolphins and Detroit Lions appear to be the only teams that might take a receiver before the Eagles are on the clock.

Philly could well end up with someone like Jaylen Waddle or others, depending on how the pass-catchers are prioritized. Regardless, the Eagles still have the opportunity to add a top talent at a position of need while also adding necessary capital as they build for the future. 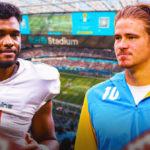 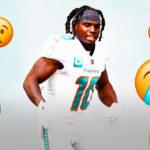 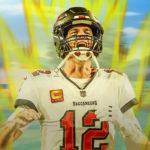 The only team I don’t project as a winner in this NFL Draft hoopla deal is San Francisco.

I’m just not entirely sure what the Niners are going for. Adam Schefter of ESPN reported San Francisco still regards Jimmy Garoppolo as QB1.

But moving up to No. 3  in the NFL Draft all but guarantees the Niners will take a quarterback in the first round. It also suggests San Francisco is not convinced Jimmy G is not the franchise quarterback.

That’s all well and good. The Garoppolo skepticism has been around for some time now. There are doubts about his arm talent and durability issues loom large. Maybe the likes of Wilson, Justin Fields, Trey Lance or Mac Jones really will prove themselves too talented to pass up.

However, was it really worth it for the Niners to give up an absurd amount of draft capital when they still seem to be evaluating Garoppolo and have some needs elsewhere?

I get the hunger to have a shot at a franchise signal-caller in a top-heavy quarterback class. Still, this just feels like a big reach for general manager John Lynch and the Niners.