Count Portland Trail Blazers head coach Terry Stotts as someone who thinks the Houston Rockets are going to be fine with James Harden and Russell Westbrook playing with each other in the backcourt.

When the Rockets acquired Westbrook over the summer from the Oklahoma City Thunder, many pundits questioned whether the two MVPs could co-exist since they both need the ball to be effective.

Entering Monday, Houston is 10-3 and both Harden and Westbrook are playing well, so it’s safe to say the two superstars are enjoying playing with one another.

Stotts and the Blazers take on the Rockets on Monday. The Portland coach says Harden and Westbrook “complement each other really well.”

Terry Stotts on James Harden and Russell Westbrook pairing: "I think they compliment each other really well. Halfcourt they're playing the same style, but Westbrook's brought a transition element. Last year they were a slow pace team and now they're one of the fastest teams."

Harden is flourishing in the half-court, isolation game per usual, while Westbrook gives the Rockets a dimension they haven’t had before: a one-man fastbreak who can push the ball with heavy pace off makes or misses. 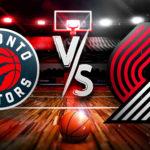