Houston Rockets superstar Russell Westbrook got himself booted out of his team’s match against the Golden State Warriors at Chase Center on Thursday.

With Houston up by a massive margin of 35 points with 6:05 remaining in regulation, the fiery combo guard for the Rockets appeared to taunt several members of the Warriors squad sitting on the bench.

Westbrook first yapped at Andrew Wiggins who just smiled at his direction, while the injured Klay Thompson flashed a smirk on his face as Westbrook continued his verbal assault. The 31-year-old Rockets guard was not done yet, trading barbs with Marquese Chriss as referees blew the whistle and threw him out of the game.

Westbrook even bumped into Kevon Looney on his way out. The Rockets, meanwhile, cruised to an easy 135-105 mauling over the Dubs for their 35th win of the season. Westbrook had 21 points, 10 assists, and four rebounds at the time of the ejection. 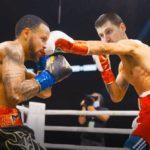 All of our NBA content can be found on the NBA section of the ClutchPoints home page here. For all of our college basketball content, click here. Stay in touch with the Rockets.