For the last few months, most of the NBA world assumed that the Golden State Warriors and San Antonio Spurs would play for the right to go to the NBA Finals. The Oklahoma City Thunder were great all season, but the odds still fell in the Spurs’ favor.

As the saying goes, that’s why you play the games. After falling behind 2-1 in the series, the Thunder rallied for three straight victories to stun San Antonio and set up a Western Conference Finals matchup filled with high octane offense.

After losing just a single game at home in the regular season, the Spurs looked unstoppable in their first five playoff games, winning all of them by an average of 24 points. When you look closer, their early departure from the playoffs looks even worse.

Only 12 teams have ever won 67 or more games. Eight of them have won the championship, and the ’16 Warriors have a chance to become the ninth.

These Spurs have joined the 1972-73 Celtics (lost in East Finals) and the 2006-07 Mavericks (lost in first round) as the only teams to compile 67 or more victories and fail to win a title. 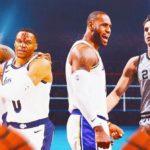 Adding to the disappointment is the fact that the Spurs finished with the seventh best point differential ever, outscoring their opponents by an average of 10.63 points on a nightly basis. Apart from the 1971-72 Bucks (+11.16), the 2015-16 Spurs have the highest average point differential of a team not to win the NBA title.

The only team left who could be an even bigger disappointment should they fall short of a title is the Warriors, of course. With a NBA record 73 wins and the NBA’s 6th best point differential average ever, Golden State has the weight of incredibly high expectations on their shoulders.