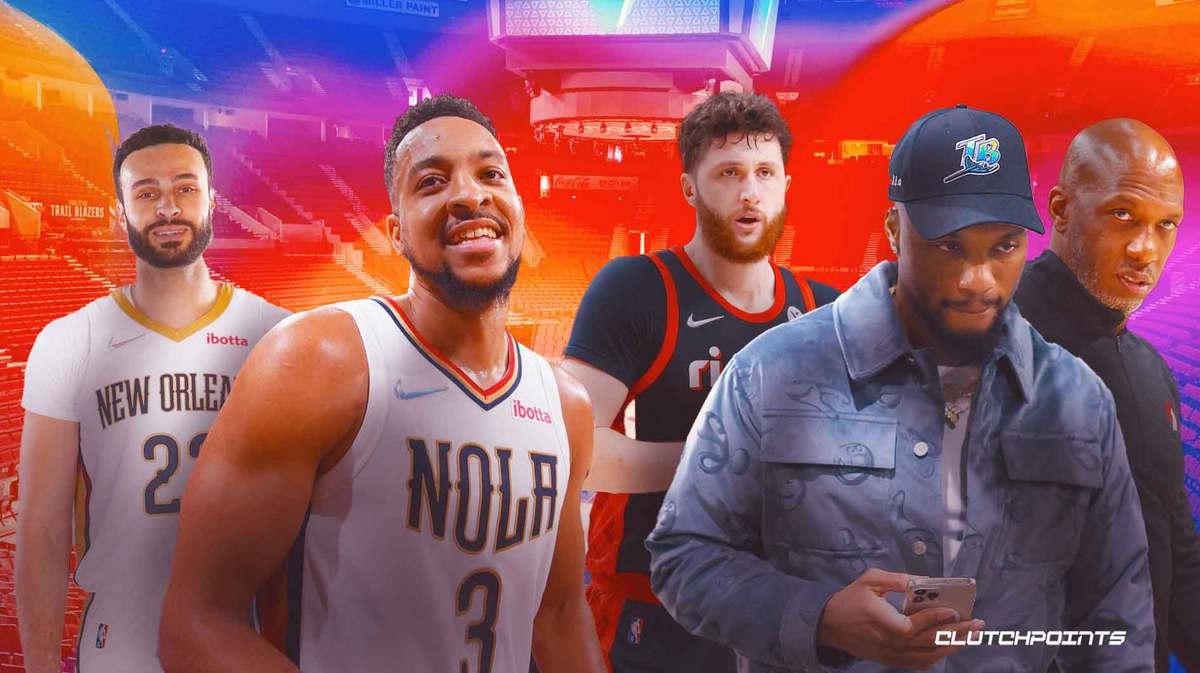 C.J. McCollum drained a tough mid-range jumper in crunch time, giving his team a two-possession lead. Robert Covington changed the game when deployed as a full-time small-ball five. Norman Powell came alive after intermission. Larry Nance Jr. forcefully answered the bell with the season on the line, providing a palpable two-way impact off the bench.

None of them did it for the Portland Trail Blazers on Friday night, though. Instead, McCollum and other bygone Blazers played instrumental roles in a rollicking do-or-die play-in game.

Watching a former franchise cornerstone and multiple supposed final pieces of the puzzle go head-to-head with the New Orleans Pelicans and LA Clippers was no doubt a tough pill for Rip City to swallow. At least Blazers fans can take some solace in the relatively low stakes of Friday’s contest.

Despite a disastrous start to the season and the whole drama surrounding Zion Williamson’s injury and weight, the Pelicans are in the Playoffs as the 8th seed 🔥

Can CJ McCollum and Brandon Ingram keep the magic going vs. the league-best Suns? 👀 pic.twitter.com/csxRUxqftu

As highly competitive and emotially charged as this week’s postseason appetizer was, they were still play-in games. The single-elimination tilt between the Pelicans and Clippers also lost some juice with the absence of Paul George, who entered health and safety protocols hours before tipoff. New Orleans and LA were indeed playing for their postseason lives, but this game lacked the big-picture significance of an actual playoff matchup.

There’s a reason the Blazers punted on competing for the play-in this season, basically. Just the possibility of one more playoff appearance meant little to this franchise after advancing there the last eight years running.

But the main reason Portland tanked over the last two months was to increase its odds of landing the best draft pick possible. The Blazers held onto their first-rounder by missing the playoffs, and guaranteed it falls in the top-10 by finishing with the league’s sixth-worst record. There’s a 37.2% chance the lottery balls bounce them into the top-four of a draft that scouts believe features four elite prospects.

It may not matter after the Pelicans withstood a third-quarter storm to come back and beat the Clippers, though—at least if Portland is prioritizing the remainder of Lillard’s prime ahead of the team’s long-term future.

New Orleans’ playoff berth means parameters of the McCollum trade won’t be fulfilled until 2025, when the Milwaukee Bucks’ first-rounder (protected Nos. 1-4) will be sent to Rip City. If the Pelicans had fallen to the ever short-handed Clippers, their 2022 first-rounder almost certainly would’ve been headed to the Blazers, arming interim general manager Joe Cronin and the front office with a pair of lottery picks come June 23rd.

The Blazers are brazenly tanking, and rightfully so (via @ArmstrongWinter) #RipCityhttps://t.co/9JTPlsrUHm

Portland, clearly, isn’t in nearly as dire straits as its 27-55 overall record and laughable -21.3 net rating after the All-Star break indicates. Cronin’s tanking effort was so brazen and shameless that it wouldn’t have been shocking if the league got involved, just like it did seven years ago with the “Process” Philadelphia 76ers. Their west-coast time slot and the validity of Lillard’s core injury might have saved the Blazers that embarrassment.

There’s no avoiding the gravity of Portland entering the summer with just one high-value draft asset, though.

Lillard’s re-commitment to Rip City means the Blazers are obligated to try and win right now. He’s alluded to the Phoenix Suns’ franchise-altering trade for Chris Paul during the 2020 offseason as the type of blockbuster move the Blazers need to make before next season, and Cronin hasn’t exactly downplayed those outlandish expectations.

There’s no player of that caliber likely to change teams this summer. Portland’s top-10 pick would be a major carrot if one suddenly becomes available, but its cupboard of attractive trade pieces otherwise is relatively bare. Anfernee Simons isn’t going anywhere, and Nassir Little’s value is still very much in the eye of the beholder.

Lillard’s age and the uncertainty surrounding his return make the prospect of trading multiple first-rounders for a star extremely dangerous for Portland. On the other hand, is an impactful but limited player like Jerami Grant—the Blazers’ most rumored target dating back to before the trade deadline—worth a high-lottery pick without the Detroit Pistons sending another quality asset back to Portland?

Trading for Jerami Grant would placate Damian Lillard, but is it best for Portland's long-term future? @ArmstrongWinter dives into the Blazers' team-building dilemma #RipCityhttps://t.co/oygiqyp8Cr

Remember, recent intel on the Blazers’ interest in Grant included the tidbit they planned on offering the less valuable of their two lottery selections to Detroit. It turns out Portland has just the one opportunity to draft a high-level prospect and maintain team control over his contract for at least the next five years.

Is Cronin willing to give it up for Grant, especially considering he’s expecting a four-year, $112 million contract extension come July?

There’s no use in re-debating terms of the trade that put the Blazers in this unenviable position. McCollum’s loud shot-making ensures it’s easy to forget he needed 24 field goal attempts to score 19 points on Friday night, let alone was easy prey defensively during the Clippers’ second-half surge. Nance’s return  from injury this season wasn’t even guaranteed back in mid-February.

As obviously dysfunctional and talent-lacking as the Los Angeles Lakers were from the moment 2021-22 tipped off, it still seemed wild they’d fall out of the play-in tournament altogether when Portland made the McCollum deal. This discussion may not be happening at all if George didn’t catch COVID-19 on his team’s most important day of the season.

The pitfalls of hindsight are obvious, but so are potential complications of an unknown future. The worst outcome of the Blazers’ trade with New Orleans was always possible. Now that it’s here, Portland must quickly adjust its best-laid plans for a truly transformative offseason.