At the end of the 2017-2018 season Oklahoma City could be facing another grim timeline, losing a top-10 player for absolutely nothing as he heads for a bigger market. Sam Presti is aware of the risks but pulled the trigger on Paul George anyway knowing that one year of Paul George was much better than tying his franchise to a “Big-3” of Westbroook, Adams and Oladipo with a supporting cast eating up the rest of the cap.

One scenario that has Laker fans salivating and radio stations in Los Angeles chirping is that Paul George and Westbrook do both enjoy playing with each other, but they’d rather do it in Los Angeles than Oklahoma. For Westbrook who did qualify early for his 35% share of the cap, this would require a massive paycut, a large hit to his legacy and extremely dedicated OKC fanbase, and if it matters at all the moral high ground in relation to all things KD.

Paul George has no such ties to OKC, he’s already made his intentions clear, so what is Sam Presti to do?

In the scenario where both players make a nasty exit, Presti may at least set the pieces in motion for a rebuild before taking off for greener pastures. Kanter becomes a decent expiring, Adams probably gets traded for picks and a bad contract, and the rest of the cast either hangs on during the rebuild or is slowly moved in non-consequential moves that reset the franchise to who it was before Durant was even drafted in Seattle. 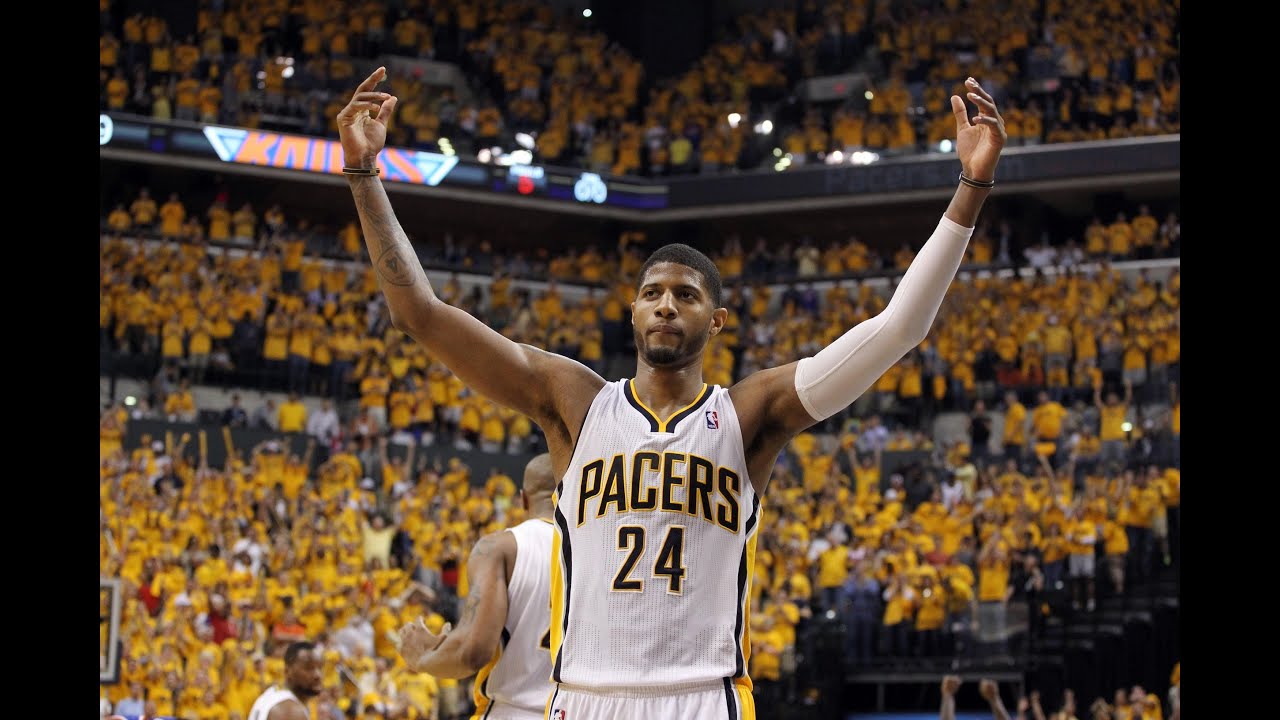 Assuming Westbrook stays and George exits, OKC will be set back (again) but some young expiring players and a ton of cap space in short order; Presti may be able to continue keeping the Thunder relevant until Westbrook retires.

The chatter over the next year won’t be about what happens in Oklahoma, but how does the league’s most popular franchise Los Angeles Lakers put the luster back in it’s purple and gold. And now, Oklahoma may play a pivotal role.

A few weeks ago, before Free Agency started, before the draft even, Chris Paul left Los Angeles to play with James Harden and the Rockets. In doing so he opted into his Player Option 0f around $24M and Houston verbally committed to giving him his full five-year Max Extension at the end of next season. He’ll retain his Bird Rites meaning 8% raises and he also gave Houston’s GM Daryl Morey a.k.a Dork Elvis an extra $8M that allowed Houston to land PJ Tucker and bring back Nene Hillario while still preserving a couple of exceptions should some need arise. The Clippers ended up benefiting by landing a couple young players, and the services of one Patrick Beverly who’s made a name for himself annoying every guard in the league.

So the question is: If Paul George could arrange a similar cushy landing in L.A. that leaves both OKC slightly better off, would he?

The contract situations between the Paul’s are a little different. Chris will be making an extra $5M over George, that helps close the gap in accepting the player option. Chris is also a little older and once his deal ends at 38 it’s unlikely he’ll get any significant dollars if he continues to play. George would be ending his deal at 32, probably good for another five-year max but if there’s any sense of decline, he could be looking at the same situation Paul Millsap found himself this summer where the offers dried up.

The ideal scenario for Paul George in Los Angeles is getting paid $308M over an 8-year span that breaks down as:

The cap will also rise in between some of the deals, but the crux of this formula is that in the middle of it Paul George will be 30-years old and eligible for the 10-year 35% max deal.

Here’s a nifty workflow to reference who gets a max deal: 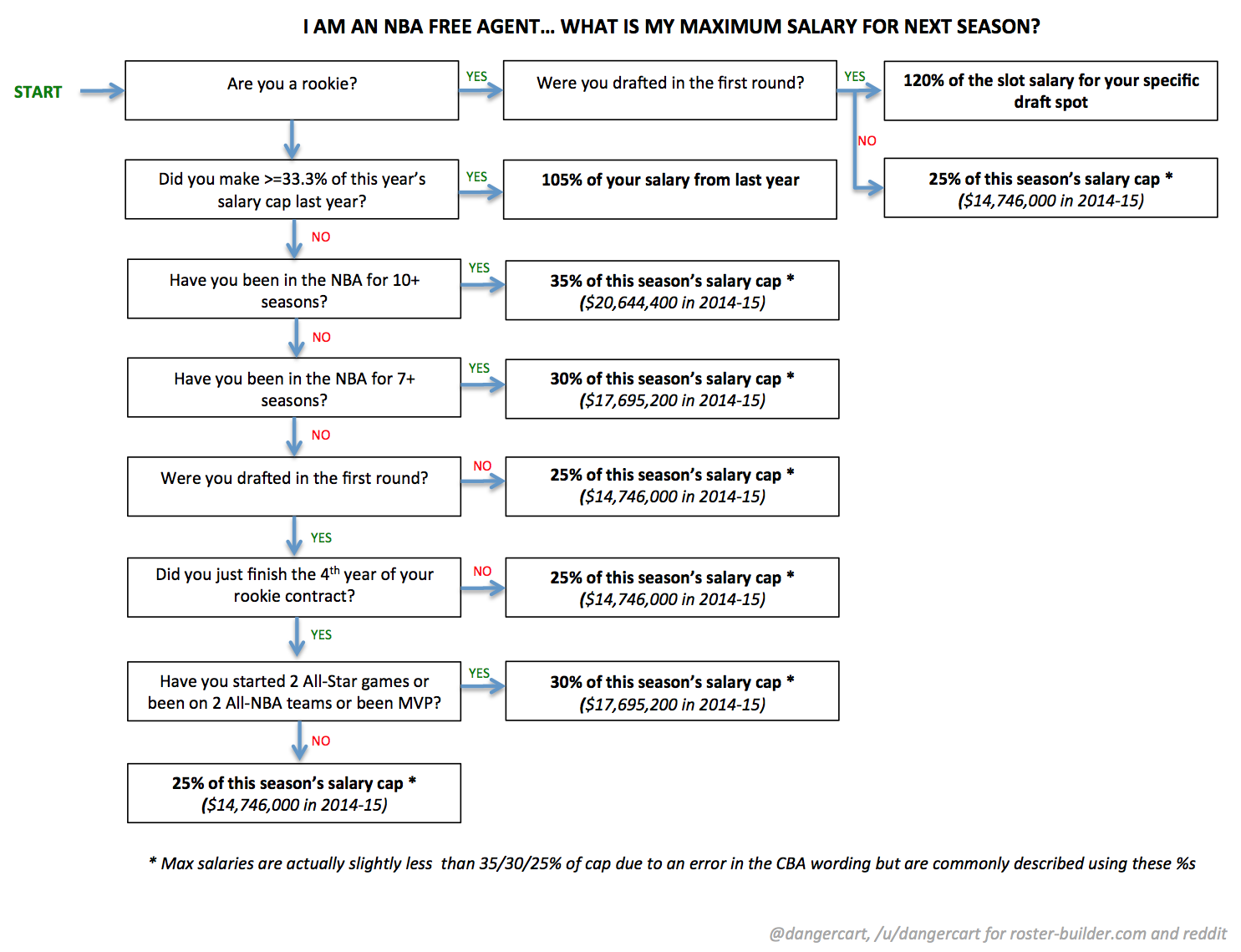 By opting out, and seeking a full max deal in Free Agency Paul George limits himself to a four-year 30% max deal with 5% raises, this will end up in the $170M range.

If Paul George decides that he wants to spend the rest of his career in L.A., is willing to bet on himself and sacrifice a little bit of security, and the Lakers can convince Presti to trade Paul George and all of a sudden the Lakers could have a ton more money in 2018 than most people expected.

Some of the assets that the Lakers could offer OKC for Paul George’s bird rights:

The Thunder probably don’t get offered that entire package, but at least a few pieces would trump losing Paul George for nothing. However, Presti would also have to gauge how much helping Los Angeles ultimately hurts his own team by giving them a golden opportunity to pair Paul George with two other max players, Lonzo Ball, and Brandon Ingram. With the 2018 Free Agent Class being headlined by LeBron James, Demarcus Cousins, DeAndre Jordan, Brook Lopez, Russell Westbrook, Carmelo Anthony, and a slew of intriguing restricted free agents the Lakers could try to vault up to the 2nd best team in the West.

Magic Johnson and GM Rob Pelinka would likely still need to find Luol Deng a new home between now and the draft but the numbers would finally work to give the Lakers a superteam without asking incoming free agents to take massive discounts. Something Magic made a priority this summer after trading D’Angelo Russell along with Mozgov, his intention was clear. He wanted the Lakers to be a looming threat, he wanted people talking about the inevitability, and it looks like they very well could be.