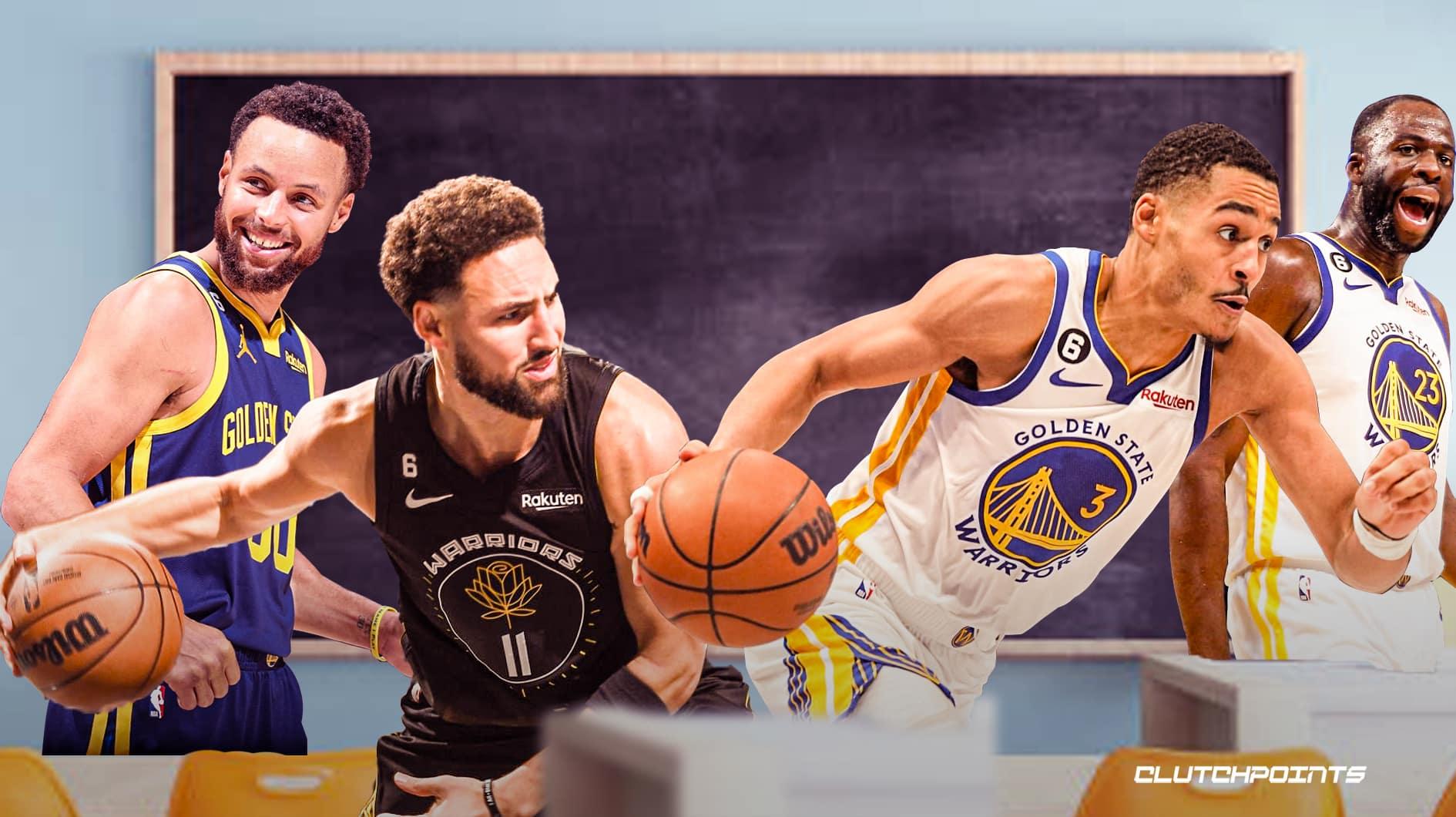 A quarter of the way through their quest for back-to-back titles, the Golden State Warriors are stuck in the same place they were when the regular season tipped off with ring night.

The defending champions are 11-11 heading into December, outside the top-eight of the Western Conference, an abjectly disappointing standing that nevertheless obscures recent progress toward a full-fledged turnaround from a disastrous start to 2022-23.

Let’s dole out some grades for Golden State at the quarter mark of the 82-game grind.

Curry is certainly a better defender than he was in 2015-16, more committed and connected on that end than ever with 15 added pounds of muscle to bang with superstars who target him in isolation. There are plenty of other reasons to suggest Curry is playing at an even higher level than when he was crowned the league’s first unanimous MVP, too.

Curry’s never been a more dangerous three-level scorer, too sturdy to be pushed off his spot on drives with the balance to finish through contact around the rim. He’s gone out of his way to play floor general during early portions of recent games, racking up assists and creating easy shots while setting a tone for the Warriors’ offense his teammates have followed.

Then there’s this mind-blowing feat of shot-making to consider: Curry is shooting 47.7% on 6.5 pull-up triples per game, according to NBA.com/stats, easily the highest accuracy of his career.

All the traditional and advanced numbers are there for Curry to follow up his first Finals MVP with his third regular season MVP. The eye test is simply undeniable.

“You run out of adjectives to describe Steph’s play. He’s just amazing night after night,” Steve Kerr said in mid-November. “…Never been better, I can say that.”

Remember when Green was definitely on his “last dance” with the Warriors, pundits and fans alike frantically constructing trade proposals for Golden State’s emotional leader to both mend a fractured locker room and put a major dent in Joe Lacob’s exorbitant luxury tax bill for 2023-24?

Green’s punch to Jordan Poole seems a world away now, and he’s again in the midst of proving his indispensable all-around value to the Warriors.

It was Green who led the players-only meeting that prompted Klay Thompson’s breakout and Golden State’s much-improved play from its 6-9 nadir. It’s his insertion to the second unit at the beginning of second and fourth quarters that’s finally stabilized the Warriors’ bench, the driving force behind their ongoing 5-1 stretch at full-strength.

Green hasn’t been as airtight defensively as he was during Golden State’s rousing 18-1 start to last season. His rebound, block and steal rates are down, perhaps evidence of more marginal athletic decline at 32 years old.

The Warriors’ offensive rating with Green on the floor absent Curry is a hideous 102.3, per Cleaning the Glass, as much evidence of Curry’s singular brilliance and awful bench lineup data team-wide as Green’s still -evere offensive limitations.

But Green’s 65.1 true shooting percentage is a shocking personal best, accounted for most by career-high marks finishing around the rim and from floater range. He’s still basketball’s best off-ball defender, also putting together a highlight reel of defensive excellence in isolation despite some slippage moving his feet on the perimeter.

There’s only one Curry, but there’s only one Draymond, too. If the Warriors put early struggles behind them to fight for another championship come spring and early summer, Green sustaining his unique, all-encompassing impact in the wake of a career-defining crisis will be among the biggest reasons why.

There’s no point beating around the bush now.

Golden State was so out of its depth over the first month of 2022-23 in part because Thompson was among the most damaging high-minute, high-usage players in basketball, exercising the regularly head-scratching shot selection of pre-injury Klay while clanking covered jumper after covered jumper.

It’s a testament to Thompson’s overall influence that since their fateful November 16th loss to the Phoenix Suns—and subsequent team meeting—the Warriors have played by far their best basketball. Thompson altering his approach to prioritize team goals over individual ones galvanized Golden State at large, resulting in the “beautiful game” offensively that’s been a constant of this ongoing dynasty.

Thompson has exploded a couple times since then, too, always reverting back to a patient, measured offensive approach once his hot hand cools. He’s shooting a scorching 51.9% on over nine three-point attempts per game in his last six outings.

Thompson still looks a half step slower defensively than he was in the last three games of the NBA Finals, and has fallen victim to inattentive off-ball defense and schematic mistakes more than any of his fellow starters. Definitely keep an eye on his lateral movement as the season progresses; he’s overstretched as a second-option “stopper” right now.

But Thompson deserves immense credit for taking the advice of Green, Curry and Kerr to heart, putting his ego aside for the good of the team, trusting the basketball gods would reward him. That’s still in the process of coming to ultimate fruition, but initial returns are very encouraging—especially considering the extent of his early-season labors.

Looking back, it was always naive to believe Poole would pick up this season right where he left off on the Warriors’ run to a fourth championship in eight years.

Golden State completely revamped its supporting cast over the offseason, replacing veteran connectors with score-first young players while putting a new onus on Poole as second-unit playmaker. His bag of on-ball tricks would no longer surprise defenders, either. The entire basketball world watched as Poole romped to an unbelievable 62.7% shooting on twos in last season’s playoffs.

Poole is still finding his footing six weeks into the regular season, at 30.5% from deep with a sky-high 16.8% turnover rate. Putting a playmaker like Green and scorer like Andrew Wiggins next to him in bench lineups has allowed Poole to work from more advantage situations offensively. He also has a natural, budding chemistry with Donte DiVincenzo.

Hopes of Poole developing into a near-average defender this season have proven premature. He remains Golden State’s biggest minus on that end, easy prey for stars to attack and hardly immune from team-defense mistakes or random bouts of lethargy.

Lineups featuring Poole and Curry sport a 117.7 defensive rating, per Cleaning the Glass, hardly inspiring confidence in their postseason utility. Don’t be surprised if Kerr is forced to cut Poole’s minutes once again in the playoffs, even assuming his jumper comes around and Green’s presence with bench lineups helps alleviate his penchant for turnovers.

There are signs Poole is back on the right track. But apart from James Wiseman, there’s no debating who’s been the most disappointing Warrior this season, even if bright-eyed expectations for Poole were always missing crucial context.

Financial factors certainly contributed to Golden State letting Gary Payton II and Otto Porter walk in free agency, but the notion its recent lottery picks were ready for rotation roles in 2022-23 loomed large to those decisions, too.

What better time than in the afterglow of another title for the Warriors to fully embrace their two-timeline strategy of team-building anyway?

Exhausting all avenues to maximizing Curry’s extended prime, obviously, wasn’t at the forefront of Golden State’s decision to rely on Wiseman, Jonathan Kuminga and Moses Moody for minutes this season. It’s indisputable now that choice was the wrong one, made with backwards motivations in mind.

There’s still no guaranteeing any of Wiseman, Kuminga and Moody will be in the rotation once the postseason arrives. That very real possibility has even risked the chance of the Warriors not getting there altogether, this team’s bench—first comprising at least two of those three once-prized prospects—hemorrhaging early leads over and over before Kerr was forced to make changes.

Kuminga, thankfully, is coming into his own as a defense-first, sparkplug finisher off the bench, playing his “best game ever” in Tuesday’s hard-fought loss to the Dallas Mavericks. Moody hasn’t given Kerr much reason to play him over Anthony Lamb, and Wiseman’s brief G-League tenure confirms what’s long been obvious about his use to the Warriors this season.

Golden State needs Kuminga, Moody and Wiseman to be good to reach its ceiling this season. So far, it’s still unclear whether any of them will even be on the floor come the Warriors’ biggest playoff games.

Current failures of the two-timeline strategy may not keep Golden State from repeating as champions. They will surely make that arduous task even more difficult, though, and cast significant doubt on this team’s long-term trajectory once Curry finally starts to slow down.