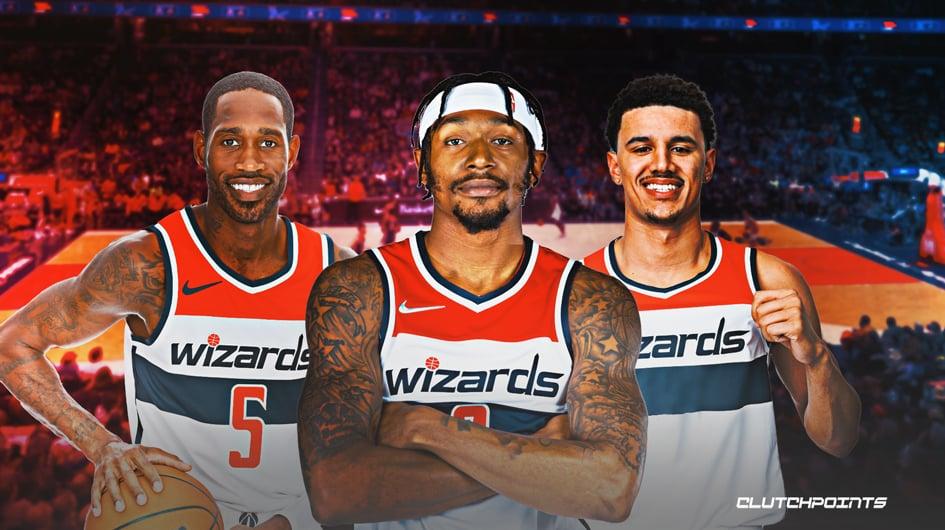 The Washington Wizards re-upped on Bradley Beal in the 2022 NBA offseason, but was that the right thing for their future?

The Wizards renewed Bradley Beal’s contract despite his missing much of last season. This new deal locks Beal up for the Wizards for five more years. Beal decided to enter free agency and subsequently agreed to a five-year, $251 million contract, which is now the second-largest in NBA history.

Bradley Beal’s salary next season will be roughly $11M more than the *entire* Baltimore Orioles payroll.

That stat and more as I break down his new contract and the franchise records he’s likely to set on the latest Chasing Stats. pic.twitter.com/ncmbyOWRsV

Additionally, the Wizards pulled the trigger on a pretty good deal with the Denver Nuggets. PG Monte Morris and seasoned wing Will Barton were acquired by Washington in exchange for PG Ish Smith and SG Kentavious Caldwell-Pope. Last year, Morris filled in for Jamal Murray and averaged 12.6 points, 4.4 assists, and 3.0 rebounds per game. In 32.1 minutes per game last season, Barton averaged 14.7 points, 3.9 assists, and 4.8 rebounds.

During the draft, Wisconsin’s Johnny Davis was chosen by the Wizards with the tenth overall pick. In terms of scoring, Davis came in third in the Big Ten last year. He averaged 19.7 points per game on 42.7 percent field goal shooting. He also put up 8.2 rebounds, 2.1 assists, and 1.2 steals per contest. As a result, he had the fifth-best rebounding average among all guards in the Big Ten. He is a player who can contribute effectively on both sides of the court and who will be extremely helpful to the Wizards. Along with ensuring Beal’s future for the foreseeable future, the franchise has significantly increased its guard depth thanks to this pick.

Let’s see if all these moves will actually make a difference for the Wizards this coming season.

At No. 10, the Wizards chose Johnny Davis, the best player available at a position of need. Davis is a skilled shooting guard with excellent defense and the ability to score from all three levels on the floor. Although Bradley Beal may have to play spot minutes at point guard, Washington now has a backcourt to build on thanks to him and Davis.

Although he wasn’t initially viewed as a high NBA prospect, Davis was the prototypical collegiate standout. As a relatively slim 6’4 wing, he’s a little bit smaller than NBA teams would expect for a lottery pick at his position. Remember that he was just a three-star recruit coming out of high school, but his productivity more than made up for any perceived physical deficiencies.

Since the Wizards have long needed help at the guard position, it is hoped that Davis can immediately step in and support Beal. Given his drive and skill-set, Davis has an excellent chance of doing just that.

Over the offseason, Wizards head of basketball operations Tommy Sheppard stirred up some controversy by speculating that Bradley Beal would serve as their starting point guard in the upcoming campaign. Right now, however, that scenario may no longer materialize after the team acquired Monte Morris, one of the league’s most reliable conventional point guards.

Morris fills a critical void in Washington. He’s a skilled table-setter who can defend both guard positions. He should also make things simpler for Beal, Kristaps Porzingis, Rui Hachimura, and Deni Avdija. Morris has demonstrated his ability to lead a squad and execute pick-and-rolls well. Although Porzingis is surely not Jokic, a Morris-Porzingis tandem ought to become somewhat effective. Morris also has decent spot-up threes and pull-up twos.

The Wizards chose to get Morris via trade rather than using contract money to sign someone like Tyus Jones. That was a pretty smart move.

It’s amazing how different his style is from Russell Westbrook’s, who previously played with Bradley Beal. This tempo and speed should work nicely for the roster. Morris’ value in Washington exceeds what it was in Denver.

Barton, meanwhile, is a legitimate combo wingman who could start immediately. He is a versatile small-ball 3 or a reliable SG who can score in bunches. He put up 14.7 points, 4.8 rebounds, and 3.9 assists last season while shooting 36.5 percent from three-point land. His addition cushions the loss of KCP somewhat.

Bradley Beal will remain as a Wizard after agreeing to a five-year maximum contract for $251 million. That happened a day after he rejected a $36.4 million player option.

Beal is a three-time All-Star who was selected third overall in the 2012 NBA Draft at the age of 19. He has played with the Wizards for the entirety of his ten-year career.

Some say he may not be deserving of a max contract. Some question his ability to carry a team or his status as a big star.

The numbers back him up, though. Recall that before suffering a season-ending wrist injury in February that forced him to miss the remainder of the season, Beal averaged 23.2 points, 4.7 rebounds, and 6.6 assists over the course of 40 games.

It’s tough to imagine Beal carrying this squad deep into the postseason, but he still gives them a face and a go-to guy.

Delon Wright and Taj Gibson are also solid additions along with re-signing Anthony Gill. None of those three will be key difference-makers, but they provide stability to the Wizards’ bench rotation.

The $251 million Beal received might seem like an overpay in a few years’ time. Still, the Wizards took the necessary steps to secure their only All-NBA talent to pair with big man Kristaps Porzingis. In addition, they added a reliable point guard in Morris, a wing scorer in Barton, and an exciting rookie in Davis.

Keeping Beal and Porzingis healthy while the coaching staff determines the best lineups around them is really the main focus of this season.

Bradley Beal was much more patient waiting for Porzingis to finish before dapping him up and following him to the locker room pic.twitter.com/gkVJkMscL9

KP has played a maximum of 51 games in each of the last three seasons. This means that he has missed an average of around 31 regular games because of injury. The Latvian nonetheless averaged 22.1 points in 17 games for the Wizards last season.

As long as Beal and Porzingis stay healthy and productive, the Wizards could succeed in winning more games than any of us may have anticipated. They won’t be a top-four team in the Eastern Conference. Still, they may spring a few surprises and end up in the playoffs.