The Los Angeles Clippers are definitely a team with a lot of motivation to prove themselves in the playoffs, especially with their massive meltdown against the Denver Nuggets last year. This season, they have the chance to get over the hump and make a deep run towards their goal of winning the franchise’s first title.

For that to happen, the Clippers need everyone to perform well on a consistent basis, especially their two stars – Kawhi Leonard and Paul George. Of course, they also need Terance Mann to step up to the challenge. His card collectors wouldn’t mind that one bit, either.

Mann entered the NBA as the Clippers’ 48th pick in the 2019 Draft. In a team dominated by PG13 and the Klaw, it was understandable that the young rookie wouldn’t get enough playing time during his first year in the league. This is evident in his rookie stats of 2.4 points, 1.3 rebounds, and 1.3 assists in 8.8 minutes per game. But while Mann’s numbers last season weren’t particularly attention-grabbing, he did have a monster game inside the bubble that showed everyone how high his ceiling can go.

Like the Los Angeles Clippers, Mann has a solid chance this year to prove he belongs in the NBA. At the same time, he has an opportunity to attract fans to invest in his rookie cards. We examine three good reasons why collectors should start collecting Terance Mann cards as early as now.

As mentioned earlier, Mann’s performance against the Oklahoma Thunder last year in the Bubble was just a small sample of what he can really do. With the departure of Lou Williams to the Atlanta Hawks, the sophomore wing has finally obtained the chance to ball out for the Clippers.

Mann’s improvement is evident during an eight-game stretch that coincided before and after the trade deadline. During these games, Mann averaged 14.75 points, including a season-high 23 point performance in a victory against the Philadelphia 76ers last month.

This season, Mann is averaging 6.3 points, 3.8 rebounds, and 1.4 assists in 17.9 minutes per game. He is also displaying an efficient offensive game by shooting 52% from two, 37% from downtown, and 78% from the free-throw line. These numbers are a step-up from last season and are definitely a good indicator that Mann is trending in the right direction.

A team that reaches the playoffs will certainly do wonders for the card value of its players. This is quite true, especially if one of the team’s young stars comes out of nowhere with a monster game in the postseason. This is a potential scenario for the Los Angeles Clippers and Terance Mann, which would only up his card value.

When it comes to the Clippers, one thing is for sure – they’re bound to make the playoffs again this year. Their squad boasts two All-Star-level talents in Kawhi Leonard and Paul George, and a string of role players who bring something substantial to the table. This will result in the Clippers winning the first round, at least. If this is the case, one of the main beneficiaries when it comes to card value is Mann.

Mann might succeed George, Leonard as the future of the Clippers

As it stands, Kawhi Leonard is the Clippers’ most important piece with Paul George coming in a close second. Be that as it may, there will come a time when these two stars will fall off their prime and they won’t get to play at the highest level anymore. When that happens, Mann has a strong chance of becoming a big name in Los Angeles.

As of now, only Mann and Luke Kennard are the Clippers’ young players who can benefit the most once their veterans start aging out. Mann, in particular, has the tools to become a premier scoring wing in the league once he develops into his prime. And with George and Leonard, two of the best wings in the league right now, acting as Mann’s mentors, the ceiling for this young player gets higher. 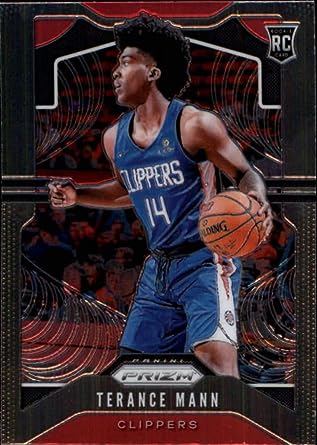 Currently, Mann’s PSA 10 Prizm rookie card is selling at around $82 on eBay. This can still go up, especially if the Clippers exceed expectations in the postseason. Rather than get left in the dust, investing in Terance Mann rookie cards while they’re still affordable is the way to go. With his present value, there’s a lot of profit to potentially gain in the future with little risk involved in this player.