A hot topic in the NFL, once again, is players kneeling during the playing of the national anthem before games. While some players choose to stand or remain in the locker room too, Emmitt Smith—the Hall of Fame former running back of the Dallas Cowboys—said he would have knelt during the anthem.

“Yeah, I think I would do something, just as much as I ran out there and defended that star when T.O. did what he did,” Smith said, via Clarence E. Hill Jr. of the Fort Worth Star-Telgram. “Why not? If I can defend the star, I definitely can defend the right for everybody to have equal justice.”

When Smith played with the Cowboys, the NFL’s all-time leading rusher was involved in a game versus the San Francisco 49ers and Terrell Owens. After Owens celebrated on the Dallas star in the middle of the field, Smith took issue with it.

Smith, on the Cowboys’ next possession, would score a touchdown and place the ball at midfield while looking at San Francisco’s sideline. Seeing that he protected the image of the Cowboys, he says he envisions himself being a player that would have spoken out on human rights. The legendary rusher also shared he has experienced racial problems during his time in Dallas. 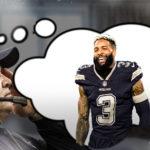 “If I can defend the star, I can take a stand for social justice,” Smith said. “I have been a victim of it. It’s not like I am talking because something happened to George Floyd. Something happened to me more than one time, a couple of times it happened right here in Dallas. I’m talking from experience, not something I read in a book and saw on CNN.”

Much has been made about whether or not a certain player stands or kneels for the anthem this season. While some teams have taken a team-wide stance on the anthem, Smith would have been one of the players kneeling.