Just about a week ago, there were rumors circulating that Danny Ainge and the Celtics were willing to part ways with Isaiah Thomas for an additional early first-round pick in last year’s draft. Rumors are always just rumors until someone who is involved can provide actual facts.

Today, Ainge spoke out refuting those rumors while also providing an explanation as to why those rumors could’ve never been true: 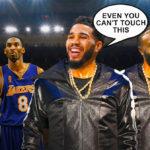 “We had eight draft picks and were trying to consolidate our picks to move up or out of the draft. We were also making plans to go get (free agents) Kevin Durant and Al Horford, so why in the world would we go there without Isaiah Thomas and try to have our best player traded for a lottery pick? It just doesn’t make any sense at all.”

Ainge brings up good points. It would not have made any sense for the Celtics to trade away their star point guard for additional picks if they were still in the ‘win now’ mode. It’s a good thing that none of these trade rumors were true as the Boston Celtics ended up finishing first in the Eastern Conference because they didn’t go through with any of those “rumors.”