Everything you need to know about Overwatch 2 Season 1 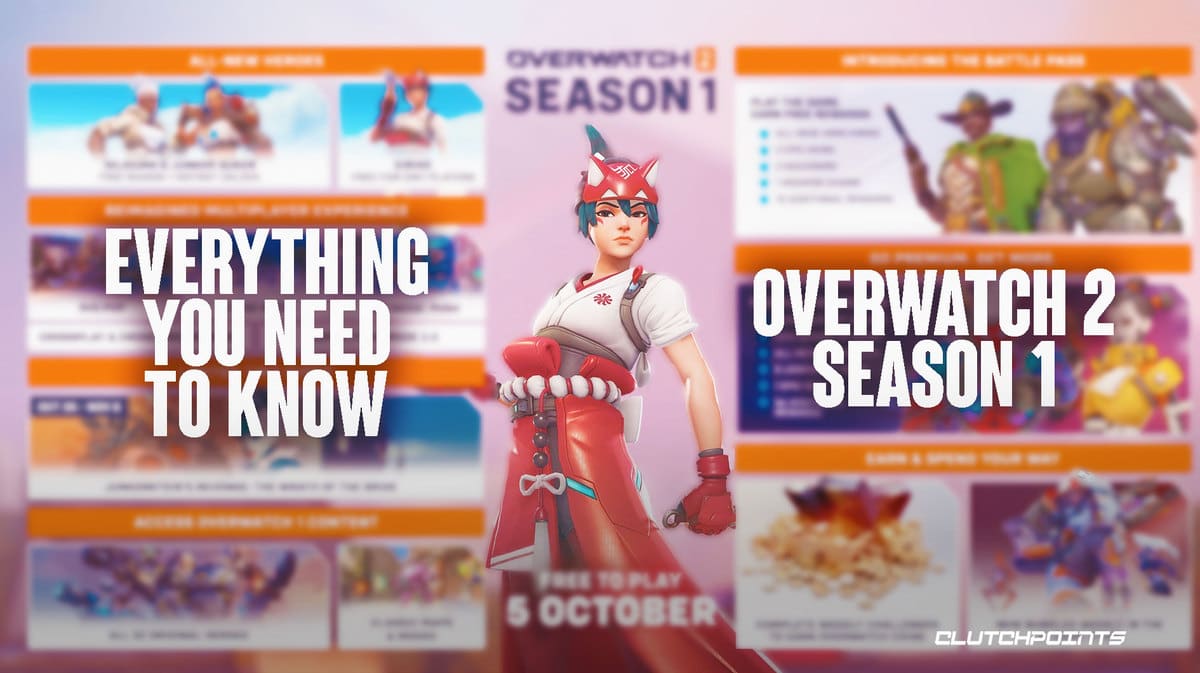 Overwatch 2 made an appearance during the Tokyo Game Show 2022, and we’ve seen the new characters coming to the game at launch, alongside the Battle Pass and some of the revised maps we’re getting for the new game. In this article, we discuss everything you need to know about Overwatch 2 Season 1.

With the game arriving on PC, PlayStation 4, Nintendo Switch, Xbox One, PlayStation 5, Xbox Series X and Series S as a free-to-play title on October 5, 2022, Activision Blizzard is changing things up on their monetization of the game. Instead of being a purchasable title with loot box microtransactions, Overwatch 2 will instead feature a Battle Pass, unlocking rewards for players as they play the game. The Battle Pass, similar to other games like Fortnite, will have a free-to-play track and a premium track, with more rewards locked behind the paid premium track. The game will also feature an in-game store where players will be able to directly purchase any skins they’d like that are available in the digital store.

The free-to-play track of the Battle Pass will allow players to unlock the new character Kiriko at Level 55 (out of 80). Alongside Kiriko, the free-to-play Battle Pass also features two epic skins, two souvenirs, one weapon charm, and 15 yet-to-be-revealed rewards.

Buying the $10 premium battle pass will instantly unlock Kiriko and give players a 20% Season XP Boost. They will also stand the chance to earn an all-new mythic skin, five legendary skins, one epic skin, and 56 yet-to-be-revealed rewards.

Playing the game is the direct way of earning points towards your Battle Pass, so the more you play, the more you unlock, playing to the FOMO model of monetization for Battle Passes found in many modern video games. On top of the Battle Pass points, players will also earn Overwatch Coins by completing weekly challenges, which they can then use to purchase other cosmetics in the in-game store, mostly featuring older skins and bundles from Overwatch 1.

The new multiplayer experience of Overwatch 2 doesn’t drastically change the landscape of Overwatch competitive gameplay, with the 6v6 being reformed into a 5v5 battle. Competitive matches will be played in six new maps on top of all the existing maps, with a new game mode, Push, being introduced. All 32 characters from the first Overwatch will make a comeback in the game.

As a free-to-play game, players will be able to access Overwatch 2 on any of the platforms the game is available in and will be able to carry over their progress through the different platforms as long as they use the same user account. Crossplay is also available, which eliminates the need for you to coordinate with your mates on which platform you all should be playing the game.

What’s next for Overwatch 2?

The game will be launching with its first season in October, and its first limited-time event, “Junkenstein’s Revenge: The Wrath of the Bride,” will run from October 25 to November 8, 2022. On top of the three already revealed characters, Activision Blizzard says that there will be one more new character coming out this year – as they promised that there will be four new characters coming to the game in 2022.

Prior to these showcases, fans, us included, have felt apprehensive of the whole idea of Overwatch 2. In our article “The REAL Reason why Overwatch 2 is already dead on the water,” we discussed why we think the game might end up failing with what it’s offering at launch. We’re still holding our breath and hoping that Overwatch 2 would actually be a success and that it will be able to revitalize the community as well as its OWL League, but this new Season 1 reveals didn’t help alleviate our concerns. At this point, I guess only time will tell if Overwatch 2 will actually capture the same lightning in a bottle that the original did way back in 2016. JUST IN: The Colts fantasy football sleeper you need to have on your team in Week 2
Related TopicsOverwatch