Kenny Golladay has quickly become a forgotten man in the NFL. The New York Giants are paying him big money, but they have barely played him this season. Against the Carolina Panthers on Sunday, Golladay even only saw two snaps — total. That was the entirety of Golladay’s exposure in Week 2, and it doesn’t seem that he’s going to be getting significantly more going forward, with Giants head coach Brian Daboll pointing to a fluid approach in terms of establishing the playing time for Daniel Jones’ downfield targets.

“It’s a continual competition at receiver,” head coach Brian Daboll said. “We are just going to keep rolling guys [through the lineup] and play the guys we think are going to give us the best chance — and the other guys have to be ready to go as backups.”

Richie James, David Sills V, and Sterling Shepard got the most offensive snaps for Giants wide receivers versus the Panthers. Even when considering Brian Daboll’s statement, it’s difficult to say that Kenny Golladay is even part of the competition at all. His minuscule playing time speaks more about his lack of relevance than his involvement in a meaningful competition. In the two snaps he appeared in the Carolina game, Golladay got zero looks from Jones.

Kenny Golladay used to be one of the most promising downfield threats in the NFL, but since signing a four-year deal worth $72 million with the Giants in 2021, he’s become a white elephant on the team’s roster. 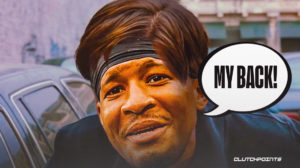