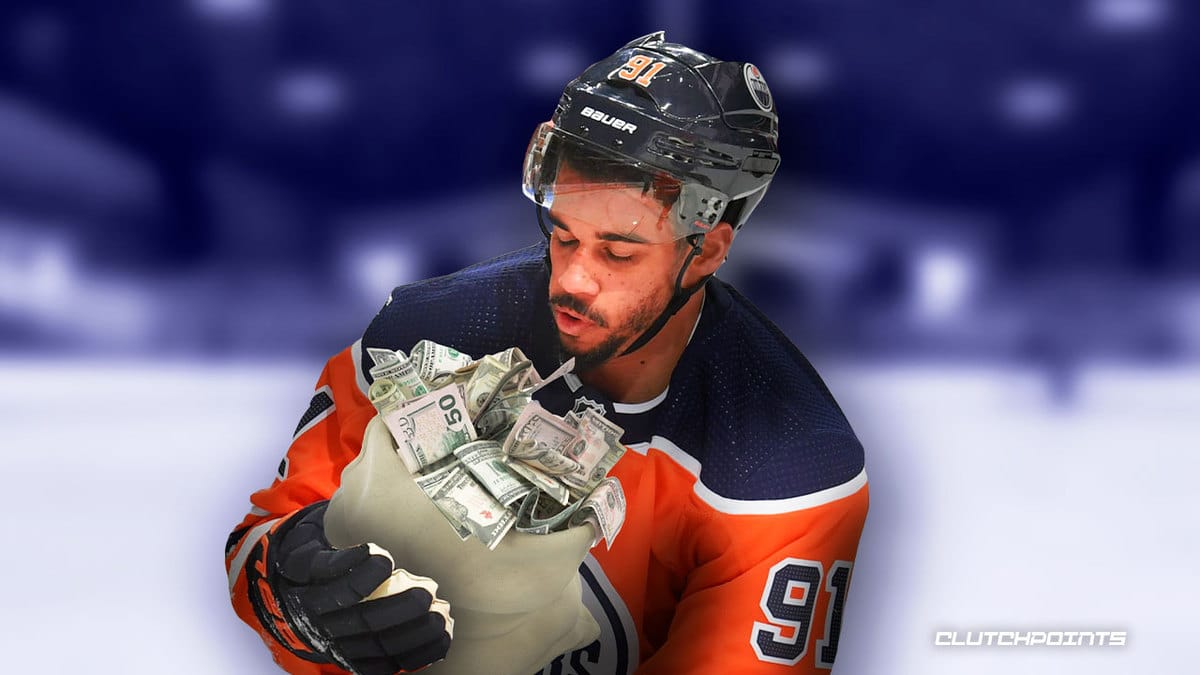 Kane joined the Oilers part way through the season, after his contract was terminated by the San Jose Sharks. He posted great numbers in his time with Edmonton, with 22 goals and 39 points in 43 regular season games, a pace of 42 goals and 74 points per 82 games. His playoff performance was also top-notch, scoring 13 goals and 17 points in just 15 games. The forward’s deal carries a $5.125 million cap hit.

Below, we look at how the contract breaks down for the Oilers.

Obviously, Kane joined the Oilers with major off-ice concerns. He was accused of domestic violence by his ex-wife, Anna, he violated the league’s COVID protocols, and was investigated by the NHL in regards to allegedly betting on games. There were also reports of his teammates in San Jose not wanting him to return in the following season.

In terms of his on-ice performance though, Kane continues to produce. He scored 22 goals and 49 points in 56 games with the Sharks in 2021-22, a pace of 32 goals and 72 points per 82. Then as mentioned, his performance at the top of Edmonton’s forward group this year was excellent, fitting in brilliantly while sharing lines with the likes of Connor McDavid and Leon Draisaitl.

Kane is a power forward who can use his body to protect the puck and has a dangerous shot. He adds a big physical presence and while his commitment to defense leaves something to be desired, there’s no denying his offensive ability.

In Edmonton, he’ll continue to get to play with two of the world’s top talents. McDavid and Draisaitl make anyone better and Kane is the kind of player the forward group had lacked.

A four-year deal for Kane makes sense. He just turned 31 years old but with the term being as short as it is, it runs a low risk for the threat of a decline. You probably don’t want to go longer than that, given by the end of the deal, Kane would be into his mid-30s. If the deal was shorter though, the Oilers could miss out on quality years from Kane.

Given the off-ice concerns, committing to any multi-year deal carries some level of risk but overall, it’s a pretty ideal length for the contract.

At $5.13 million per year, Kane could provide excellent value for the price. The forward has managed a pace of 30 goals and 60 points per 82 over each of the last four seasons. Given how well he performed with the Oilers last season, it wouldn’t be shocking to see him close in on 40 goals and 80 points next season.

With the Oilers looking to contend right now, they need to walk the line of adding key pieces while maintaining a manageable cap situation. While Kane doesn’t come without concerns, having his production at this cap hit is a huge win for the Oilers. Even if Kane’s numbers were to slip a bit, it’s still a really manageable price to pay.

Retaining a player who can produce at the rate that Kane does for just over $5 million per year is key for Edmonton.

One caveat to the deal is that it does come with some pretty airtight trade protection. Included in the first three years of the contract is a full no-movement clause. This becomes a 16-team no-trade list for the final year of the deal.

Obviously, a full no-move clause is always a risk because it limits a team’s flexibility. If things go sideways with Kane, the Oilers are left without options to move the forward.

Given the reasonable cap hit and term though, the trade protection is easier to accept. The Oilers are looking to compete now anyways and trading Kane while he provides good value early in his contract makes little sense. Plus with the no-move clause becoming a partial no-trade clause in the final year, the Oilers will be able to reassess their position at that time.

Kane’s Grievance with the Sharks

There is still a major x-factor in the situation, though. After Kane’s contract was terminated by the Sharks, the NHLPA filed a grievance to oppose the termination.

The situation remains unresolved, but things get interesting if Kane wins the grievance. There’s the chance his rights and contract could revert back to the Sharks.

Again, we’ll wait to see the result of the grievance but it’s a plausible scenario and one that would make things pretty messy.

As of now, the Oilers have locked up a high-end forward on a really reasonable contract. There are concerns with Kane and a no-movement clause isn’t great but there’s upside with the deal for Edmonton. Of course, the grievance could throw a wrench in things but assuming he does end up on the four-year deal with the Oilers, he could provide great value.

Both the cap hit and term are really manageable for the Oilers and at least in terms of Kane’s on-ice impact, he should provide high levels of production on a really reasonable contract. JUST IN: 1 MLB trade deadline move the White Sox should have made
Related Topics