The Cleveland Guardians are in the middle of a tightly contested race a top the American League Central. They are fighting with the Minnesota Twins and Chicago White Sox for the top spot, while also trying to make up ground in the AL wild card race as well. The Guardians are two games back of the Twins in the AL Central, and 2.5 games behind the Tampa Bay Rays in the race for the final wild card spot in the AL.

For much of the season, the Guardians have struggled to get any production out of their designated hitter spot, and that’s largely been where Franmil Reyes has resided this season. Reyes made the spot his own after hitting .254 with 30 home runs and 85 RBIs last season, and earned himself the nickname “Franimal” thanks to his massive frame and massive home runs.

The 2022 season has been a struggle for Reyes, though. He’s hitting just .213 with nine home runs and 28 RBIs, which is a far cry from his production from last season. Reyes has been horrible for the Guardians this season, and it ultimately led to their decision to designate Reyes for assignment this afternoon.

The Guardians have designated Franmil Reyes for assignment.

At this stage of the season, designating a player for assignment is basically like releasing them. Teams aren’t going to be in any rush to bring Reyes aboard given how bad he’s been this season, meaning Reyes is probably done playing baseball in 2022.

Reyes has some upside, but when he’s not hitting home runs, it’s tough to justify playing him everyday given how much he strikes out (104) and how little he walks (14). It’s a tough turn of events for Reyes, but it’s a move that has been a long time coming, and should improve the Guardians over the final two months of the season. 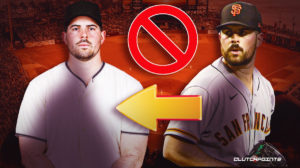 JUST IN: 1 MLB trade deadline move the Giants should have made
Related Topicscleveland guardiansFranmil Reyes