No major professional sports league in the country has embraced globalism with arms spread wider than the NBA. As the league continues to extend its reach across the world going forward, Charlotte Hornets guard Tony Parker envisions a future in which the NBA has teams playing in Europe, whether as part of the current league structure or in a system that would allow successful overseas clubs to qualify for competition against their American counterparts.

“Hopefully the discussion will go forward with the NBA. Maybe one day we will have an NBA Europe. Or something like that,” he said in a recent interview with Forbes. “Maybe not a European team playing in the NBA but maybe an NBA Europe where you’ll have an own division and then the winners can play in the U.S. I think that in the NBA they are very interested in the prospect of doing something in Europe. Basketball in Europe is growing every year and is getting better and better.”

Commissioner Adam Silver has taken several major steps toward ensuring the NBA’s worldwide audience continues to grow since succeeding David Stern in 2014. Most recently, the league, in collaboration with FIBA, announced a new 12-team outfit called The Basketball Africa League, which will be comprised of professional teams from many different African countries. The league will begin play in January. 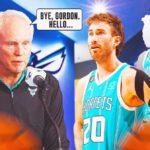 Parker, 36, is one of the most decorated European players in NBA history. The Frenchman is a six-time All-Star, won four championship rings with the San Antonio Spurs, and was named MVP of the 2007 NBA Finals.