After Steph Curry sank a three-pointer to put the Warriors up 116-109 late in their eventual series-clinching Game 5 victory over the Trail Blazers, TNT’s camera crew panned over to the luxury box inhabited by, among others, Sonya and Dell Curry — Steph’s mother and father. The following ensued.

Here’s another look at what transpired.

I have two questions

1) Is this Sonya Curry?
2) If YES to question 1, WHO IS THIS DUDE TRYIN TO SLIDE INTO HER DMShttps://t.co/ydVNLe0MtS

What… what in the world was that? What kind of voodoo transfixion forces a body to contort like that?
More importantly, that man was not Dell Curry. Though the few seconds of awkward hip contact doesn’t tell the full story, the intimation was fairly evident.

And, yeah, Twitter had a field day with this one.

I think we all know who it was who put the camera on Sonya Curry pic.twitter.com/X3msbgIs11

"good game but I saw your moms up there all hugged up with some dude… pic.twitter.com/qUhM3da8vf

Wait till Derek Fisher finds his way to Sonya Curry

Dell made that quick look to the left tho. Lol

that sonya curry clip left the whole tnt crew on some “i ain’t sayin nothin, you say somethin." 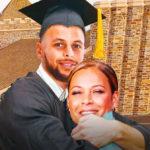 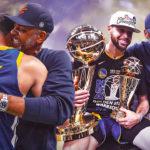 Stephen Curry’s dad: Everything you need to know about Dell Curry

Sydel Curry, Steph’s sister, had a response to the Twitter firestorm that ensued in the wake of her mom’s licentious moment with another man. She was — um — likely none too pleased.

Timeout: y'all gotta chill, my father is 2 seats away from her lol

Yeah, so, he was. But that doesn’t mean that whatever the hell that hip stuff was didn’t happen.

Alright, so Sonya Curry is probably not cheating on her husband, and if she was she probably wouldn’t express it as blatantly as she did. But, you better believe that Dell will be keeping an extra watchful eye on her from now on. That couldn’t have been a pleasant car ride home.