Keep or sell ’em: Zion Williamson cards are at a crossroads for collectors

The postseason this year has been a long stretch of unpredictable, yet enjoyable games for basketball fans everywhere. The NBA’s young stars, in particular, have been living up to the hype surrounding them during the playoffs. Players like Luka Doncic, Trae Young, and Ja Morant have performed well as young stars under the bright lights of the playoffs. Absent from these games, though, is last year’s number one pick – Zion Williamson.

We take a look below at Williamson’s value in the card market, as compared to his peers. We also determine whether getting his stock at this point in the season is a good idea or not.

In a post by Slabstox, Williamson’s value in the card market has been erratic since July of last year, around the time when The Bubble in Orlando was about to begin. At that time, the price of a PSA 9 Zion Williamson base Prizm rookie card was at the $800-level.

Williamson’s price went up to $1,500 near that period and came crashing down to below $500 when the New Orleans Pelicans got booted out from The Bubble. When the season started, his stock would rise up to $2,100 and drop down to a little more than $500, which represents a sharp fall from its peak.

As of now, Willamson’s gem-mint PSA 10 Prizm rookie card is at $400 on eBay. This sale is even lower than the price of a PSA 9 slab reported by Slabstox. 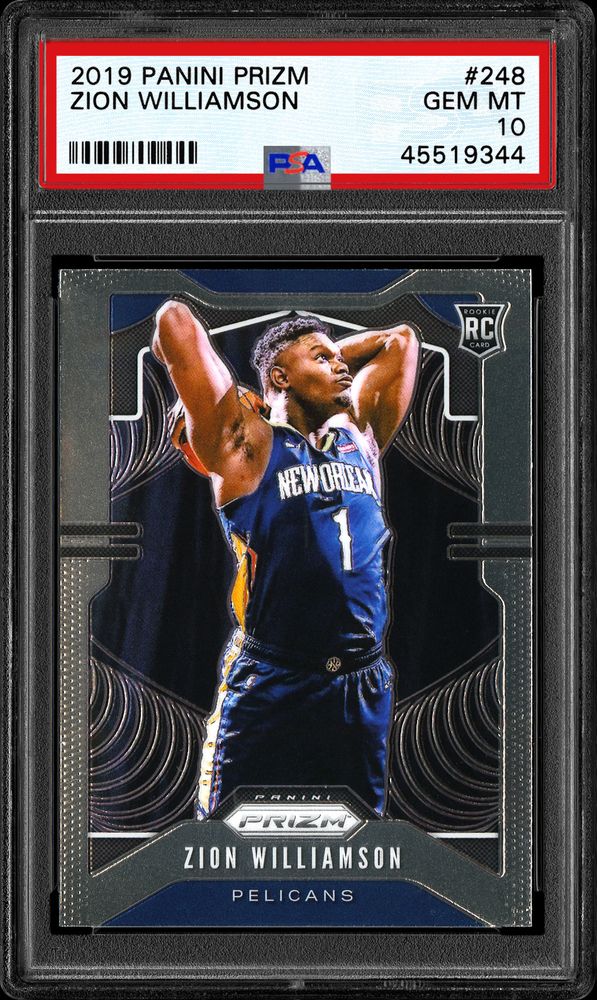 All things considered, his price drop is caused by a lot of factors surrounding the sophomore forward. For one, the Pelicans fell short of the NBA Play-In Tournament, and the playoffs. Even with Williamson playing at an All-Star level, the franchise’s failure to bring him to the postseason affected his prices in the card market.

The same trend can also be applied to other young stars who have been eliminated from the playoffs. Using a PSA 10 base Prizm rookie card as the standard, prices of Ja Morant and RJ Barrett, two of Williamson’s notable draft class members, have gone down to $240 and $100, respectively.

Those who are still playing in the playoffs are not even exempted from this dip. For example, Trae Young’s PSA 10 Prizm rookie card is currently valued at $304. Only Devin Booker ($925) and Giannis Antetokounmpo ($2,000), All-Stars who are still under the age of 30, boast more expensive cards.

Should You Get Zion Williamson Rookie Cards Now?

It’s important to remember that Williamson’s performance as a sophomore exceeds that of his first season in the league. He played at an All-Star level by boasting elite athleticism paired with guard-like skills for the majority of this year. His current PSA 10 value below $500 will certainly not last long.

This is the reason why collectors should pounce on those Zion Williamson rookie cards as soon as possible. The Pelicans’ All-Star forward is expected to continue his impressive showing this season unto the next. Once he does, the demand for his cards will soar up, which in turn, will drive prices through the roof.

Zion Williamson is a talent that can be compared with the likes of Luka Doncic, Trae Young, and Jayson Tatum. Investing in his cards as early as now is a safe bet that can only yield dividends down the road.