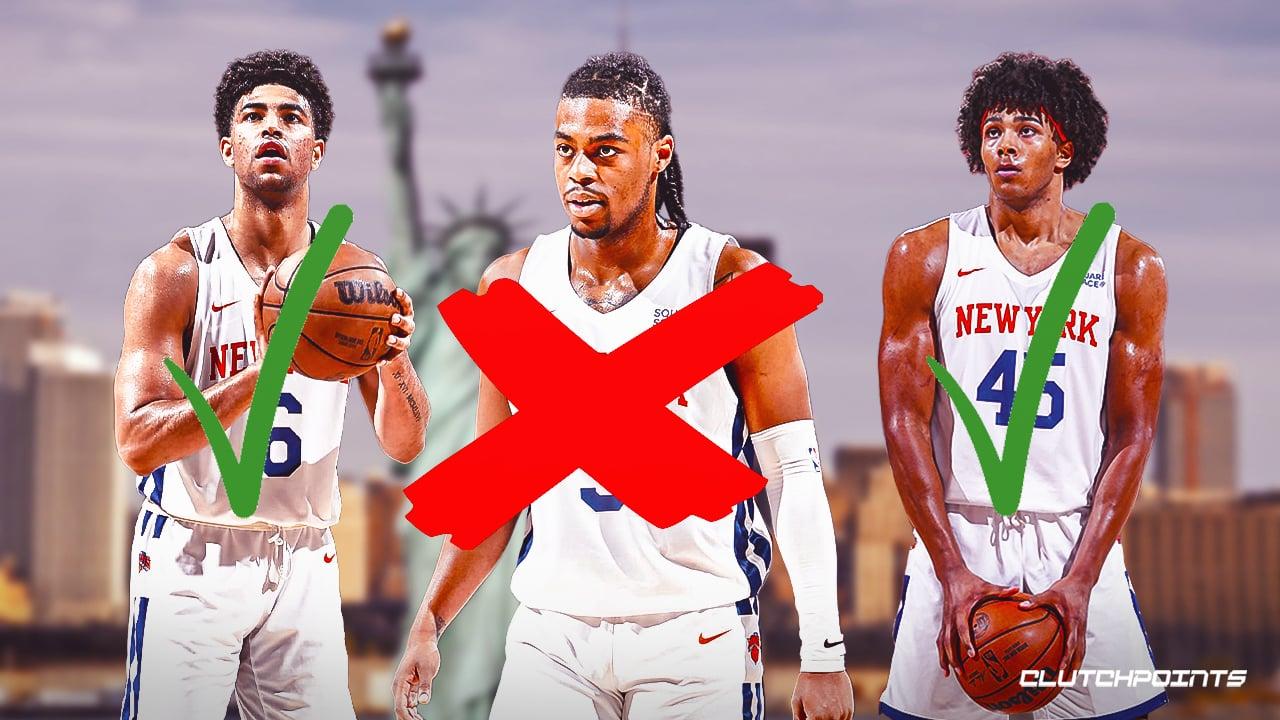 The New York Knicks had an exciting summer league performance to help kick off the 2022-23 season. The team made it all the way to the Summer League Final where they lost to the Portland Trail Blazers. This was the first time the Knicks have ever made the Summer League Finals. While the addition of a ring for the winning team might have made the loss sting a little bit more for New York, there were still plenty of positive takeaways for the team. Here are the three biggest overreactions for the team following the Las Vegas spectacle.

Few players impressed as much as Quentin Grimes in Sumer League. The second-year guard played a major role in the Knicks’ success and served as the centerpiece of the team. He averaged 22.6 points, 4.2 rebounds, 4.0 assists, and 1.2 steals per game. There was a ton to like in the play of Quentin Grimes in the summer league. The greatest compliment a guy can receive in summer league is that they do not belong there. This was the case with the Houston product as he looked to be the best player on the floor in every matchup.

The 22-year-old showed maturity in just about every area of his game. He scored at an elite level, flashed playmaking ability, and defended extremely well. As the rumors swirl about a potential Donovan Mitchell trade, the progress shown by Quentin Grimes is positive across the board. If the Jazz are intrigued by his play it could help get the deal done. If they are not, it appears Grimes will be ready to step into the available minutes that could be there following the trade. Regardless, the young guard continues to control what he can control and is improving his game. Grimes opened some eyes with his play in Las Vegas and should be looking to carry this momentum into the regular season.

Another notable second-year Knicks standout was Jericho Simms. The 58th overall pick in 2021 had a solid season last year playing primarily in the G-League. The Texas product showed he has continued to progress in his play and looked the part of an NBA role player. Simms averaged 11.6 points, 9.0 rebounds, 2.2 assists, and 1.2 blocks per game. He had impressive control of the paint and also did an excellent job beating opponents down the floor. The big man flashed good hands and mobility, great rebounding, and solid reads when he was doubled.

It is going to be tough to find minutes among the Knicks center group. Mitchell Robinson is returning to the team and the franchise also added Isaiah Hartenstein in free agency. Regardless, the flashes Jericho Simms showed are extremely exciting. The 23-year-old still has some growth to do, but the progress he is showing is exciting. The biggest red flag is his free-throw shooting as he connected at just a 40% rate in summer league. Even still, he seems slightly ahead of the developmental curve as most would expect at this point in the game.

Trevor Keels is not NBA ready

There was a sense of excitement when the Knicks selected Trevor Keels with the 42nd overall pick. The 18-year-old was the 23rd-ranked recruit in last year’s recruiting class according to 247sports. Keels underperformed slightly at Duke and saw his draft stock slip as a result. The 6’5 guard has a unique style of play with his bulldog-like mentality. While he is still very young and has a great deal of development left to do, it is clear Keels is still a ways away from being able to contribute at the NBA level.

In summer league, he averaged 5.8 points, 4.6 rebounds, 2,6 assists, and 1,6 steals per game in his 25.9 minutes per game. He also shot just 25.6% from the field, 20% on three-point attempts, and 60% at the free-throw line. This type of inefficiency will make it impossible to earn a spot. While Knicks fans should not give up on Keels entirely, expect him to take some time at the G-League level to master his craft. At this moment he appears to lack a defining NBA skill or role which is a concern moving forward.

While there are oftentimes surprise players in summer league, this was not the case with the Knicks. They were led by their established high-caliber players who were expected to run the show. Myles McBride also had some really nice flashes and a solid overall summer league. Undrafted free agent Jean Montero of Overtime Elite underwhelmed and struggled at the summer league pace. Feron Hunt, whom the Knicks have on a two-way contract, showed some really nice flashes and boosted his stock. Overall, it was an exciting overall performance from the Summer Knicks with a ton of positive takeaways to bring into the season.