The Trade Package Of Doom? Reliving The Allen Iverson Sixers-Nuggets Deal In All Its Gory Detail

Allen Iverson played in Philadelphia for 10 years, leaving a slough of highlights along the way. However, the Sixers traded the 11-time All-Star to the Denver Nuggets in the summer of 2006, ending one of the better eras of basketball in the franchise’s storied history. This is the story of the famed Allen Iverson trade.

For a variety of reasons, including a reported disagreement with the coaching staff, Iverson requested the trade. On December 19, 2006, the Sixers obliged. As part of the deal, Philadelphia sent Iverson and Ivan McFarlin to Denver, who sent back Andre Miller, Joe Smith and two first-round picks in the 2007 NBA draft.

The Sixers made more moves with the two picks they received from the Nuggets. At no. 21 overall, Philadelphia selected DeQuan Cook. However, Cook was traded to the Heat for Jason Smith, who Miami selected at no. 20 overall.

Philadelphia’s second first-round pick from the Allen Iverson trade (no. 30 overall) was of lesser notoriety, especially looking back at their NBA Draft history. The team actually decided to trade down to the second round (to 42nd), where they acquired Derrick Byars.

“You are now a member of the Denver Nuggets,” an ESPN reporter said to Iverson in his first interview after the trade. “How is that feeling for you?

“It’s a great feeling,” Iverson replied. “I’m just happy the whole process is over, but I’m more happy with the situation that I was put in. I just think I was put in a situation where I can succeed.

Iverson played well with the Nuggets, making the playoffs in his first season with the team, setting Nuggets records on the way. He was paired with Carmelo Anthony in Denver. At that time, the two stars were the NBA’s no. 1 and no. 2 scorers. 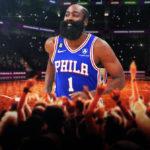 Iverson only spent two seasons with the Nuggets, however, as he was traded to the Detroit Pistons in November of 2008 for Chauncey Billups, Antonio McDyess and Cheikh Samb.

In the end, it seems the Sixers didn’t get the return they would have liked for a player of Iverson’s caliber. He ended his tenure in Philly with the highest scoring average in franchise history (28.1), and is second all-time on the points scored list (19,931). Notably, the Sixers did not win another playoff series after his departure until 2012, when they defeated the top-seeded Chicago Bulls in the first round.

Nevertheless, the famed Allen Iverson trade will go down in NBA lore as one of the biggest happenings ever.