There comes a time in every young boxer’s career when they need to figure out if they’re built for the sport. Are you able to punch someone in the face? Are you able to take a punch? Can you deal with the violence? Are you willing to get back up if you fall? Nathan Lugo was eight-years-old when that question was answered for him.

He was up against someone constantly getting the better of him. Losing to this person was nothing new. Nathan had been up against him multiple times but just couldn’t get change the tide. Well, that was the case until he sent him flying through the ropes. Nathan looked down at his fallen opponent and wondered what happened. What happened was that Nathan Lugo knew exactly what he wanted to do with his life.

“I was so proud, but I still lost that fight, so I was kinda like…by the first fight I won, it was crazy like my feeling, it was crazy,” Nathan Lugo told ClutchPoints. “It just gives you so much of a rush when you win.” 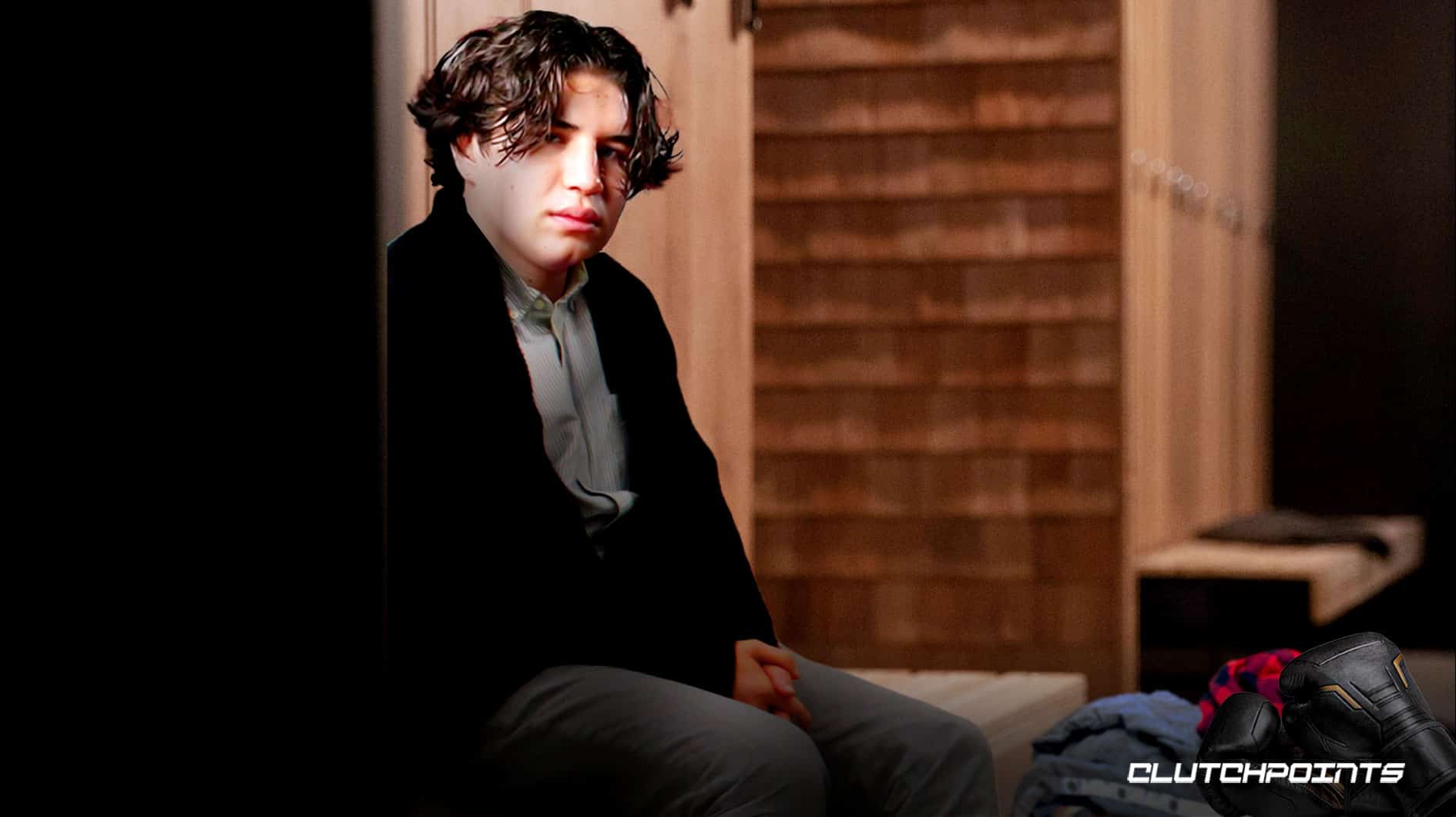 He would go on to lose the match but he was setting up the foundation for something bigger. Nathan didn’t know it yet but he was missing a crucial piece to the puzzle. There was one person that knew how to unlock the greatness within him. Enter Michael Lugo, Nathan’s father. Michael had been in Florida for the majority of Nathan’s life. Nathan lived in Georgia with his mother.

Boxing wasn’t supposed to be a career when Nathan Lugo first started. He was bullied in school and his mother wanted to do something about it. To counteract the bullying, she signed him up for boxing lessons. Things seemed to be going well with the lessons until Michael Lugo came back into the picture. He went to one of his son’s classes and couldn’t believe how bad the training was. It didn’t take long for him to decide his son was better off working privately with him. He saw something in Nathan and knew he needed to help him unlock his potential.

“He kinda made me forget everything because he didn’t like how they did it. He was like ‘alright your punching is ok, but just forget it. We’ll redo it we’re gonna just do the basics first.’ So we started from the ground up again when we got back. So I think it was really good and it helped me out a lot cause I have a lot of bad habits.”

“I entered that gym as a member and I kinda removed him from boxing class and we started working on the side. Just going over the fundamentals and teaching him actual boxing. Because what they’re teaching him is…basically is a babysitting class for the parents when they did the workout. 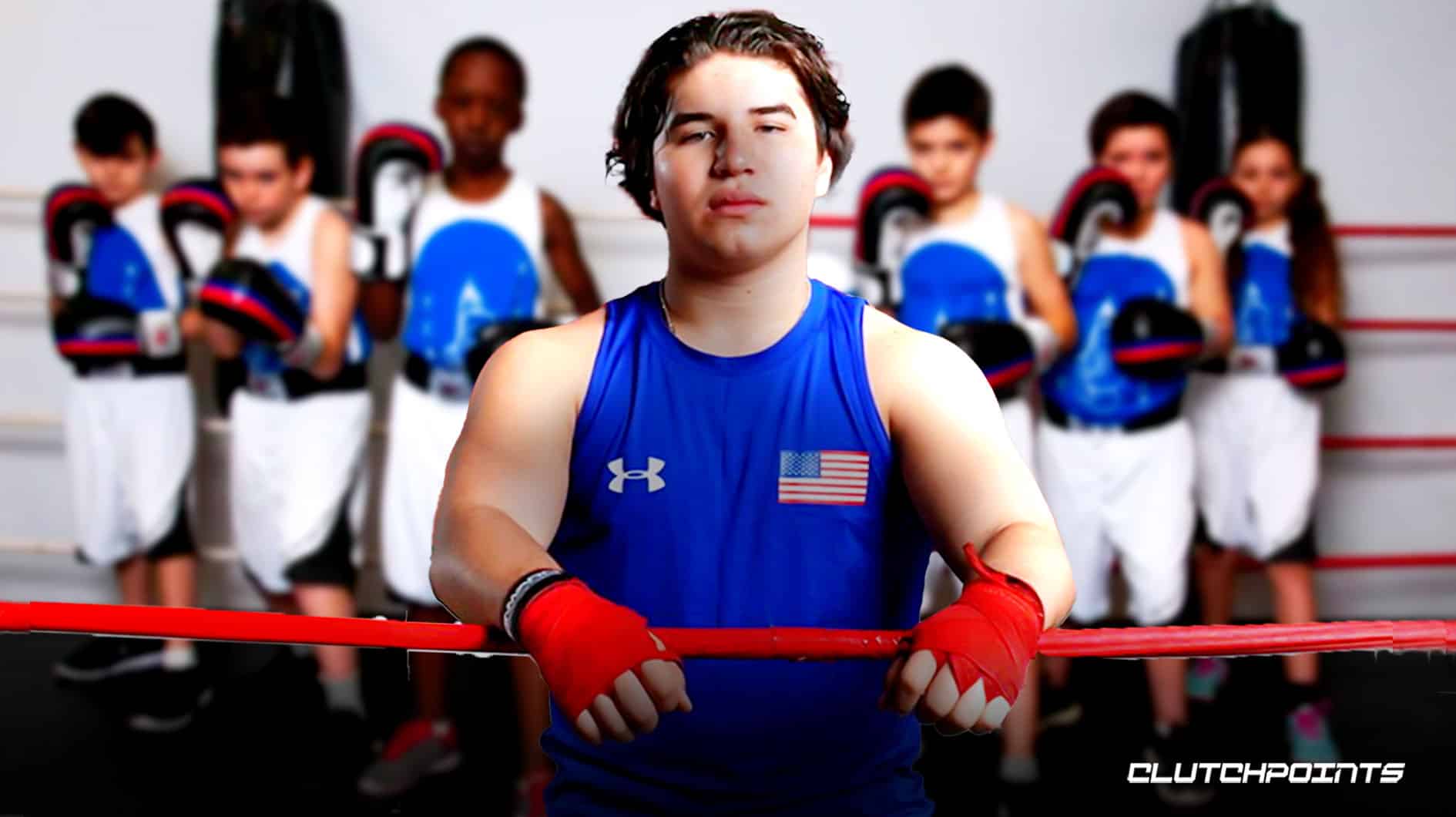 “Then I did that, other parents started watching us, asking me to train their kids. I told them ‘I just train my son.’ They became a little more persistent and I basically took a couple of more kids and that was kinda the inception of Lugo Boxing.”

‘Lugo Boxing’ turned Nathan Lugo into one of the best prospects in the boxing world. The 17-year-old has fully dedicated his life to boxing. Going to school with black eyes was normal. Teachers knew Nathan was a boxer, and so did the bullies. Your energy becomes different when you know you’re capable of beating up anyone that steps up to you.

“They were looking at my hands a lot and they could see just the scars on them and then they’re like ‘nah…I’m good.’”

School became something of an obstacle. Nathan had a clear path and a dream, though, school was something he had to do. It’s difficult to stay focused on two things at once. Nathan’s parents quickly realized that boxing was something he was good at and he needed to dedicate his life to it to become successful. They came up with a plan and Nathan became a ‘homeschooler.’ His typical day became very different from the average teenager.

“I wake up, I make some food, finish my home school quickly, just hang out for the rest of the day. Play some video games and then it’s up to the gym. Workout from 5 until about 9 or 10. First, we start off real hard with cardio, we got bag work and whole other stuff, work drills. It just depends what type of day it is.”

For Nathan to get to the point of dedicating his day to boxing, he needed to prove that he was truly good at it. There are a lot of factors in making a good boxer and part of that is the mental aspect. Taking a punch is very important. Obviously, you want to make sure you don’t get knocked out easily. You also want to make sure that mentally you can take a punch and keep going forward. Nathan proved to his father that he truly had the mentality of a fighter.

“I would say maybe a month into really giving him technique. We’re doing mixed and I wanted him to slip one way and I was throwing a hook for him to go the other way. We just miscommunicated, that really, really popped him. He kinda just shook it off. I threw it pretty hard and I say ‘well he’s tough as hell.’ His chin has never been in question.”

Nathan and Michael Lugo have an interesting relationship. They are father and son but also coach and pupil. It’s not always easy to manage a relationship like that. Michael knew what his priority was when he became a father and coach. He was a father first. 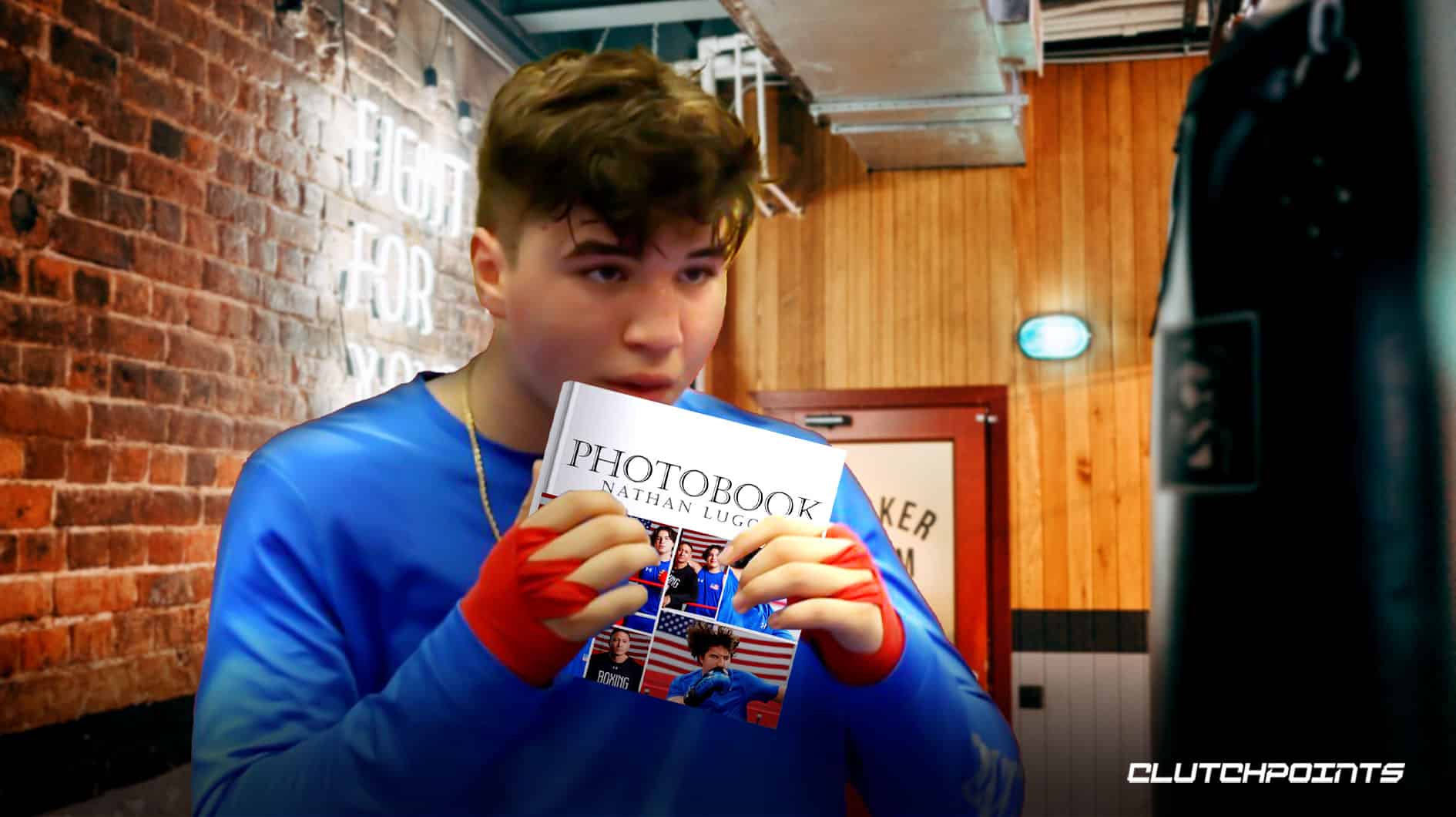 “For me it’s easy…I’m a dad above everything, but I also have a good mind for compartmentalizing what we need to do. Yeah, boxing continues at home, but also being a dad continues in the gym. I think it also allows me to be a better coach and be a dad because when I work with the other kids that are not mine, I treat them like they are mine. Obviously, I went a little harder on the boys growing up.

“I had parents coming up saying ‘hey I want you to treat my kid like the way you treated yours.’ Being a dad also allows me to be a better coach.”

Having your coach at home also means you have to stay disciplined at all times. There’s no sneaking off to parties or eating junk food for dinner. Michael was right there to keep his son on the right track. It may seem difficult but that’s the life they chose. Becoming a boxing legend has its price and Nathan is happy to pay it, every time.

“It wasn’t bad. It was just like when I was younger I couldn’t do some stuff, I still can’t do some stuff. I don’t wanna go out and party and stuff like that. Obviously, that’s one of them, because a lot of kids these days will be doing a bunch of stuff.

“Like when I was little, I couldn’t…had to miss some days at school and some birthday parties, some hanging out with friends. You gotta sacrifice some stuff for boxing, I don’t mind it.”

All of those sacrifices are setting Nathan Lugo up for a bright future in boxing. Currently, he has big plans for the next two years. The Olympics are coming up in 2024, and they will be taking place in Paris, France. He wants to be a heavyweight by then and look for an actual challenge. Nathan can be seen on YouTube piecing up grown men. It’s a big reason why he only wants to spar experienced and elite competitors.

“I don’t spar with green people, it’s just what we post. This guy, I got the better of him, but I spar these pros…I don’t like sparring with green people. If I’m trying to get better it’s just not doing anything, it’s a waste of time but not in a bad way. When I spar with these pros that are hitting harder, bigger and faster, that’s the work I like.”

So what makes Nathan Lugo so special? Plenty of kids think they’re going to be the next Floyd Mayweather or Canelo Alvarez. Nathan has proven to many people that he’s truly special. Coaches have found themselves embarrassed as they watch him break down their star pupils. He has big power, speed, and excellent fight IQ.

Nathan and his father both have different opinions on what exactly makes him so special. His greatest strength may be in that you can point to many different parts of his game as being elite. When it comes to Nathan, he believes his greatest strength is quite simple. He’s better than you.

“A lot of people think I’m just aggressive, but I can actually box. Though I feel it surprises people for some reason like ‘oh he’s boxing around’. Like ‘yes I can,’ cause I didn’t with you doesn’t mean I can’t. ‘He can’t box’ that’s what they always tell me. They have that mentality that I can’t box and I pick them apart and you watch the coach’s face and it’s so funny. They’re just like (shaking head).”

Michael Lugo believes Nathan’s biggest strength is in his fight IQ. The thing that has always separated the greats from the average boxers is the ability to make adjustments mid-fight and not stay stuck on one particular game plan.

“For him to be able to process, Nate can make adjustments in the ring in real time a lot quicker than I can call up. He’s got so much experience, he’s got 200+ fights. He has seen a lot and he has processed a lot and there’s no substitute for experience.” 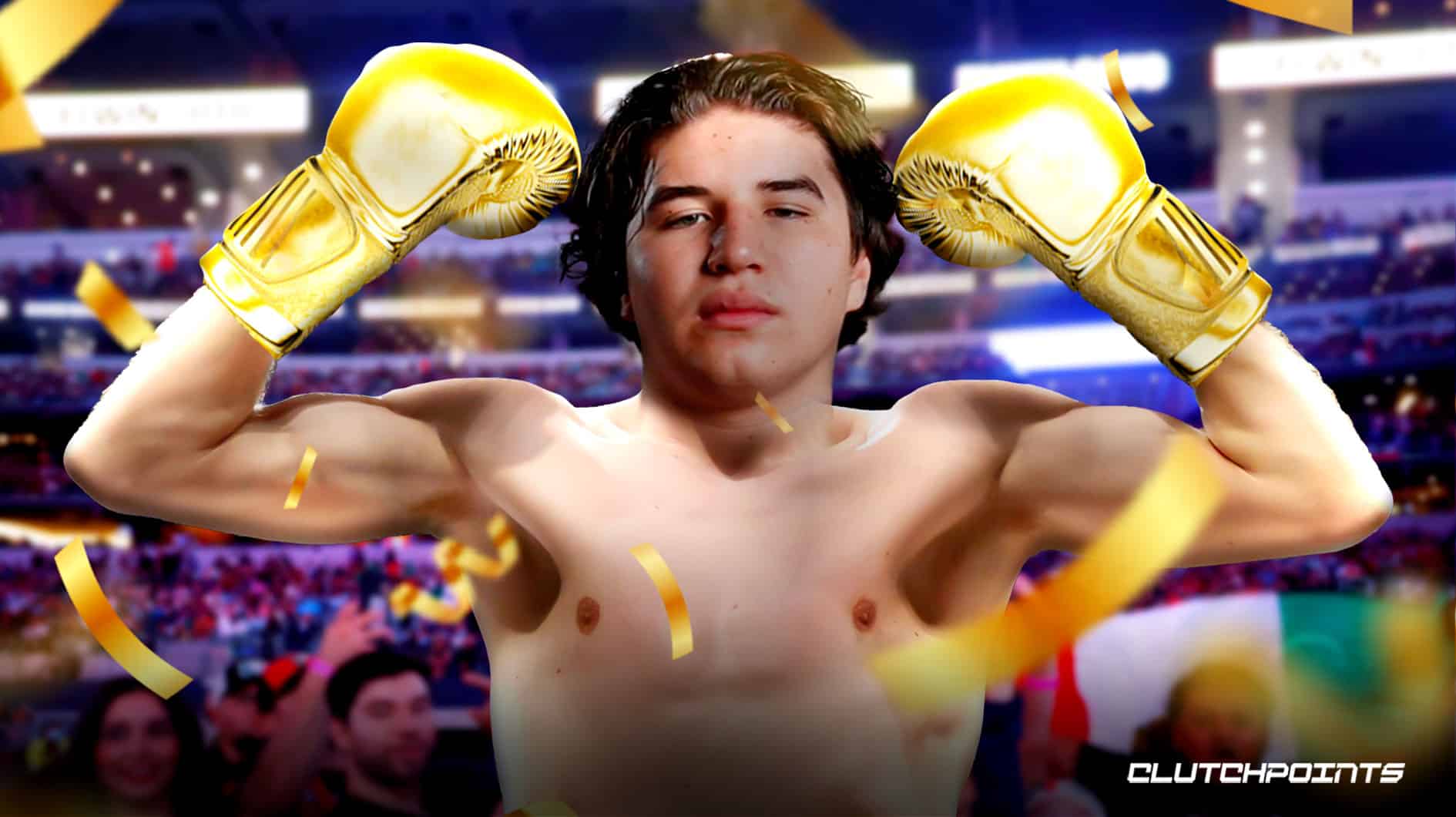 Nathan will have the opportunity to prove himself with the Golden Gloves tournament and then the Olympics in 2024. It’s the first step to putting his name out in the mainstream. That’s only the short-term goal though. Plenty is waiting for him once he makes the switch to the professional world.

Michael Lugo sees a similar goal for his son. He already sees the greatness when he’s in the gym. Nathan has nothing to prove to anyone. It’s all about getting the eyes on him and showing just how far he can take this thing. He can take it pretty damn far.

“God willing he stays healthy, Nathan is going to the top. His mindset, his work ethic, his ability to analyze people, break them down tactfully, physically. The world is his, he’s saying he wants to be the best boxer of all time, and when he says that, there’s something that I’ve always envisioned for him.

“He has the ability, he has the mindset, he’s freakishly powerful and he knows how to fight and he knows how to box. And it’s just a matter of time. He’s young right now and five years from now people are gonna see everything that I see when I walk into the gym, when I pull him to the side and started working.

“Speaking as a dad, the future, the ability that he had and as we continue to work on it became more and more apparent to me and now people are starting to see that. In the next five years, we’re gonna be on ESPN, DAZN, whatever options are available to us. We’ll sit down as a family. As a team, we’ll move forward.”