The rebounding legend offered his own version of the president’s message and 2016 campaign slogan.

“MAKE AMERICA SAFE FOR MINORITIES” Rodman wrote back with a retweet of the president’s early morning post.

Dennis Rodman is clearly referring to the continued issue of mistreatment against people of color by law enforcement in America that has sparked nationwide protests over the past 10 days. This came after video footage captured the murder of George Floyd at the hands of Minneapolis police officers on May 25. All four police officers have now been charged for their involvement in Floyd’s death, as peaceful demonstrations continue in cities across the country.

The five-time NBA champion and the 45th President of the United States have a personal friendship dating back to their days as tabloid celebrities in the 1990s. The two now share a mutual friend in North Korea Supreme Leader Kim Jong-un. 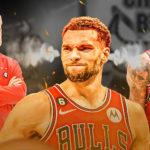 “I like Donald Trump,” Dennis Rodman told Sports Illustrated in 2019. “I don’t like him as a president, but he’s f—–g cool as f–k. Donald Trump makes me laugh. He tries to be this holier than thou guy, and I kid him about that every time I see him, I don’t look at him like the president, I look at him like a friend. He can carry a torch with me anytime, someone who I can sit down, chit chat, and have a beer with.”

The good news? The NBA season will reportedly start soon.