Kevin Garnett is a Hall of Famer for his outstanding NBA career, but he was also a Hall of Fame trash talker. One of his most infamous bits of trash talk was an alleged comment he made in 2013 toward Carmelo Anthony about then-wife La La Anthony.

During a game between Garnett’s Boston Celtics and Anthony’s New York Knicks, KG allegedly told Melo that La La tasted like Honey Nut Cheerios during an altercation. In an interview with Michael Pina of GQ, Garnett is denying ever saying such a thing:

As Bleacher Report’s Adam Wells points out, La La has also denied that KD made that comment. Via ESPN:

“Kevin Garnett in fact had never said that I tasted like Honey Nut Cheerios,” she wrote. “I tried to figure out how this big lie was turned into a media firestorm. I still can’t answer that one … Melo and Kevin are cool today. And now it’s nothing but a faint memory.” 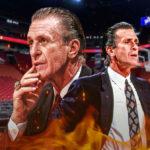 Melo himself said at the time that KG said something to set him off, but he didn’t go into specifics on the matter. He was suspended one game for stalking the Celtics’ team bus after the game.

We may never know what Kevin Garnett actually said to Carmelo Anthony that night. Perhaps they’ll spill the beans at some point, but all we have right now are rumors and then two of the parties involved saying it never happened. There will surely be plenty of people who stick to the story that the cereal comment was said, but for now, we just have to take KG and La La’s word.