Brooklyn Nets star Kevin Durant’s trade value has massively increased this offseason, but interested suitors has no one to blame but the Rudy Gobert trade.

According to Michael Scotto of HoopsHype, the NBA executives he talked to expressed belief that the Minnesota Timberwolves overpaid to get Gobert from the Utah Jazz. To recall, Minnesota gave up Malik Beasley, Patrick Beverley, Walker Kessler, Jarred Vanderbilt, Leandro Bolmaro and four first-round picks, as well as a pick swap for the big man.

Naturally, the Nets’ asking price for Durant–who is obviously more valuable than Gobert–also increased. If the Jazz can get that much for the Frenchman, why can’t they get more for one of the best offensive talents in the NBA, right?

In reality, though, one general manager said that Durant’s real worth is a “James Harden type” package.

Five NBA executives who spoke with HoopsHype at Vegas Summer League felt Minnesota overpaid for Gobert and increased the price tag for Durant in the process. When asked in general what Durant’s trade value should be worth following the Dejounte Murray and Gobert trades, one NBA general manager told HoopsHype, “Durant is worth a James Harden type of package.

When the Nets traded for James Harden from the Houston Rockets, they also had to give up three first-round picks and four first-round pick swaps. However, they didn’t have to part ways with any high-impact player.

As things currently stand, the Nets not only want a young rising star for Kevin Durant, but also a superstar talent along with a massive number of picks and pick swaps.

It remains to be seen if anyone will bite on the Nets’ asking price, but surrendering that much for an aging star just seems to much of a gamble. 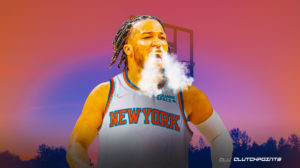