Denver Nuggets star center Nikola Jokic is one of the most unorthodox yet talented big men in the NBA. Jokic is really good at two things- passing and shooting- that centers normally aren’t skilled at, among other things. Not only is Jokic unique on the court, but he is a unique personality off of it, as the Serbian big man has a great sense of humor which has earned him the nickname, the Joker. That sense of humor was on full display recently when Jokic detailed the hilarious moment he found out he was named an NBA All-Star starter.

That’s awesome. Nuggets start Nikola Jokic was playing video games when he found out via his wife Natalija, who called him to tell him the news, that he was named an NBA All-Star starter. Jokic clearly didn’t want to be bothered while playing his video game, not even by the news that he was honored as one of the best players in the league.

Jokic further elaborated on the hilarious moment, emphasizing just how into the game he was. The Nuggets star is very relatable in that he values his time relaxing and doesn’t want to be bothered during it.

Everyone should strive to be as carefree as Nuggets star Nikola Jokic when he didn’t want to stop playing video games to find out he was an NBA All-Star starter. 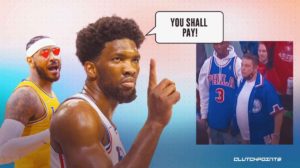